*Affiliate links are present for 13 Reasons Why and if you click to make a purchase, I will make a small commission from this.

I have seen the updates all over my Facebook feed. Of course I was curious. But I am one to read the book before watching the show or movie.

That said, I have been wanting to read 13 Reasons Why, by Jay Asher for quite some time. Actually even before the book was made into a Netflix show. 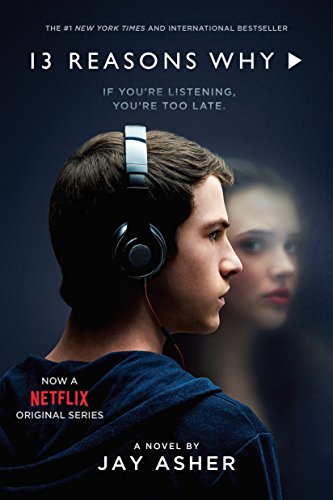 See I have also lost count how many times I had the book in my hands at Barnes and Noble, when I have taken my girls to buy more books for their ever growing library.

Yet, I patiently waited to get an e-book copy from the library for the last few months. The list was understandably very long.

Finally, I got my hands on that ebook copy late last month. I couldn’t put down my iPad and finished the book in less than 2 days.

To say I was left reeling after reading and subsequently viewing the Netflix show in a little under a week would be an understatement.

See having been a former teenage girl, who had her fair share of drama filled high school days. So on that level, I could relate.

Even as a former middle/high teacher, who witnessed teen angst on a whole new level, I most definitely could also relate.

And now more than ever being the mom to two young daughters, who will in the upcoming future live through their own drama laden teen years, I had to not just read the book but also watch the show.

However if you are unfamiliar with the overall story or just been living under a rock, then I will sum it up for you here.

The book and the Netflix show revolve around high school sophomore, Hannah Baker. She is truly unhappy after many and varied different encounters with her high school peers. Many of these encounters, while not earth shattering to some, put together were that and more to Hannah. In essence, Hannah was bullied and mistreated on more than one occasion.

Because of this, she ultimately decides to end her life. But before she does, she records 13 cassette tapes. She dedicates each of the tapes to a different person who she felt negatively impacted her life. She pretty much blames each of these people for her ultimate decision.

The tapes are being listened by each of the 13 people in sequential number order posthumously. In the book, as well as the show, Clay Jensen, who just happens to be the subject of tape 11, is the one listening to them and relaying the events to us.

The book, I felt, was done very tastefully and handled this tough subject matter quite well. The book, though, made me feel that Hannah’s story occurred more in a vacuum than the show did. Also, it just ended abruptly when the book concluded.

The Netflix Show also had to deal with visually living up to the book’s high standard and add layers to it still. One thing, I can say about the show, is that it sadly portrayed teens pretty accurately in my humble estimation.

The show, also added, more adult presence is the form of Hannah’s parents, Clay’s parents and more high school administrators, such as the principal, guidance counselor and teachers, too.

Why you should read, as well as watch #13reasonswhy

Even though these adults did exist in the book, the show broadened their roles that much more.

The Netflix show delved more into not only Hannah’s perspective, but also gave us more insight into why each of these people who effected Hannah did what that did. Plus, we got to see how it impacted each of these people afterwards. It also left us with a sense of what next? Possibly a second season, if the rumors are true.

Hannah was most definitely bullied by not one, but multiple classmates, who were both girls and boys. Both the book and the show drives this point home. The show, though, goes more in depth on this.

The book leaves a bit to the imagination as far as Hannah’s ultimate demise. But the show, not only explains exactly how Hannah ended her life, but it also gruesomely gives a bird’s eye view of Hannah’s actual suicide.

I must admit, when I first was viewing the actual culminating  episode where Hannah kills herself I was more than upset and taken a back. But after having processed it, I think the filming of it while raw, was necessary to drive home how final suicide really is.

The thing is that this effected me on a personal level as a mom. Watching Hannah’s mom struggle with her daughter’s final decision was gut wrenching and heart breaking for me.

It left me with pause on how I myself would parent my own kid through this tumultuous time of their life.

But keep in mind, I am an adult viewing and processing this though. So, I am also trying to keep that in mind with my assessment. I mean all I have shared above so far is from that perspective.

See I have heard middle and high school kids are viewing this.

While I do think this is an important book and show for that age group to be aware of, I am not sure that it is something they should be reading or viewing without some form of parental guidance.

The book, I do think is age appropriate, for late middle schoolers and high schoolers. But I would say, parents should at the very least also be reading the book, as well as having an open dialogue with their kids.

I hate to sound like a helicopter parent. But with the show, my gut recommendation would be to watch it with your teen. I am not going to lie, but even at almost 40 years old, I was left with so many emotions by the end of this show especially.

I know this sounds like a no brainer. But I need to say it still.

See at my age though, I like to think I am able to see the bigger picture. But as a teen, I can tell you I most likely would have seriously grappled with the graphic depiction of Hannah’s story. I probably would have also put myself into her shoes more than once.

Trust me, if you don’t think teens act this way with each or also feel all sorts of emotions on a daily basis, then you are just deluding yourself. This is the reality more times than not.

So, to that end, teens are more than capable of viewing and relating no doubt. But how they process the information here is what troubles me.

Like I said I can see the greater picture here. But my worry and concern is some teens may not. They may even see what Hannah did as an appropriate reaction or even something they could see themselves doing.

Therefore, I think the book and the show, as well as such important vehicles to open the lines of communication with teens and their parents now more than ever.

I am not implying that all teens would react this way. But still I do believe some could and/or would.

Yet I hate to sound preachy, but would once again highly recommend if your teen is reading or viewing this show to be in loop and speak openly, honestly and freely with them on this.

Kudos though to Jay Asher for writing a very well thought out and relatable book. As well as Netflix, for adapting the book into an equally thought provoking show that could help teens and parents bridge the gap to help open the much needed lines of communication on bullying, teen suicide and so much more here.

Have you read or watched 13 Reasons Why?

Tell me your thoughts in the comments…