Allegedly my two daughters were playing with some of my old Beanie Babies, when it happened.

My youngest was holding the lion Beanie Baby, when she decided that the lion needed to tell her older sister’s Beanie Baby, “That’s bullshit!” 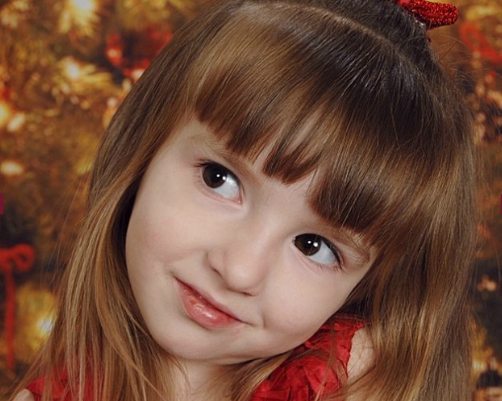 Where could this innocent face have learned her first swear word??

I admit I wasn’t there for my younger daughter’s first curse word – a right of my passage – as some may say.

It happened under grandma’s watch.

She immediately stopped to ask her to confirm what she had just heard.

My little one very calmly and innocently repeated the phrase confirming what my mom hoped she hadn’t heard.

What proceeded was my mom trying to find out where she heard this and why she would say this.

Immediately upon realizing she might have done something wrong and be in trouble, the same child clammed up and wouldn’t tell her grandmother, nor her father when he questioned her, too.

Once I finally was able to sit down with her, I also continually received the same quiet, but equally aggravating response as both my mom and my husband.

Then just as my frustrations were seemingly bubbling over I found myself almost uttering her now famous first curse word, BULLSHIT, ironically right before her admission.

I literally caught myself, as I almost said this to my now 4 year old child, quickly realizing that the culprit might very of well have been none other, then yours truly.

Yes I was the guilty party, who taught my 4 year old how to swear!

Even now, I sheepishly admit, I have been known to have a potty mouth, especially in my younger days and even now sometimes when I lose my temper a few choice words may slip out.

I thought I have done my best to watch what I am saying in front of both girls, but sadly I must have slipped.

So, guilty as charged and not proud by any means for my slip up.

Yet, more proud could I not be that actually she didn’t want to rat her own mother out and is why she was indeed resistant, as well as hesitant to divulge where she actually heard this first ‘bad’ word of probably many as she ages.

But when all else fails, my kid has my back and is definitely my girl!