I am still quite shocked and gobsmacked even days later as to what transpired.

At the time, I stood there pretty much stunned and on the verge of tears, because my own motherly instinct took hold of me, as you scolded and reprimanded me treating me like I was some sort of an errant child.

When your mom claws came out at me for sticking up for my still only 5 year old daughter, who decided to innocently carry her Disney Elsa stuffed toy with her while we shopped, after your own daughter grabbed that same doll out of my girl’s hands, so did mine.

Because as moms we are hardwired to have our kid’s backs.

However, back to the matter at hand.

What you didn’t witness five minutes prior to this incident were my two kids clearly bored entertaining themselves by jumping on the outdoor furniture while my husband and I attempting to price it.

See we moms all have our moments with our kids.

But I quickly diffused our rambunctious kid wrinkle in time by leaving my husband to find said price out and redirecting my girls to look at the toys where at least I knew they would be more entertained in that moment.

That is when it the above too place and happened.

As we were walking in the toy aisle with me right behind them, another young girl seemingly lifted my daughter’s doll out of her hands and turned to what appeared to me to run off picking up speed.

So, my natural gut instinct was to reach out grabbing the toy back, as well as find my mom voice telling this young girl that the toy was not hers.

Never did I put my hands on your actual child, nor would I ever to another child.

My question to you is, “Where were you when your daughter was running off with my daughter’s toy?”

You clearly weren’t watching your kid in this moment at all.

My own girls are still relatively young that I would never leave them alone in a store to their own devices let alone to fend for themselves or even God forbid the unspeakable might occur.  I am all too aware of what could happen if I take my eyes off of them for even a few seconds.

However since you weren’t indeed there watching your own daughter, you assumed something and clearly felt you needed to make it known.

You went on the offensive immediately, quite perfectly and maybe even rightfully so in your mind.

Never would I knock you for sticking up for your child.

As much as you have a right to be your child’s advocate and champion, then again so do I.

Yet, it doesn’t excuse you from letting your child roam free in this store and then pounce on another mother when you sadly weren’t doing your job as a mom yourself. 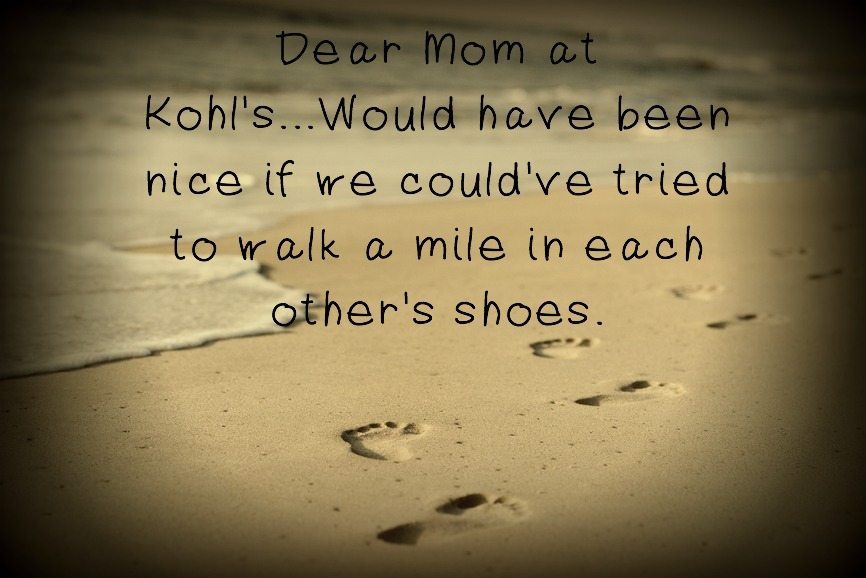 Still though as I can’t even begin to walk a mile in your shoes neither could you in mine.

However I can more than guarantee if you didn’t come across as a larger than life bully in the heat of the moment, this Mom would have been more than likely in your corner.  Also, probably would not have felt the need to defend herself by any means by doing her very best to embrace the situation and even reached out to try to make sure your daughter was OK.

Sadly, I wasn’t given that opportunity, as you were my judge and jury even before getting all the facts straight.

You had already indeed convicted me as guilty.

But, still I shouldn’t have had to defend myself to you or anyone else on this level.

However what upset me the most wasn’t that you got loud with me.  I am a big girl and can clearly deal with the repercussions of my actions. Still at first, my flight or fight response clearly took over and the fight response began to take hold.

I wish I could say I handled myself better, but you baited me and got a more than fierce reaction from me towards you.

This doesn’t excuse your behavior – as when I shared this with a friend, who reminded me that sometimes bad parenting is still at the core bad parenting.

My same friend also reminded me that even if your daughter might not have fully understand, it is still essentially up to you, as her parent, to try with all your power, understanding and love to model the right behavior.

But instead of trying to be the mother that your daughter most certainly needed today, you chose to bury your head further in the sand arguing over the semantics of the whys and the hows with me.

Nor, did this teach your daughter right from wrong for a possible next time something similar occurs.

Your ranting not only made me uncomfortable for how you handled yourself during this moment in time.

My heart actually broke thinking about this whole experience knowing your daughter might not have fully comprehended that the doll in question wasn’t hers nor what was transpiring.

Though never did you try to calmly explain this to your daughter or diffuse the situation, but decided to take your upset and frustrations out on me (another parent).

I highly doubt that getting this heated did any good to keep your girl from getting further upset or anxious as I can tell you that my own daughters definitely were quite unnerved during and even afterwards asking me tons of questions.

At the end of the day though, I am more than saddened of how I reacted in the heat of the moment, but am at the very least proud that once I did compose myself hours later that I did my best to explain this to my girls by taking this moment in time to teach them a lesson or two.

I would like to think that maybe you did, as well to your girl.

Still I am not sure what was going on in your head though before, during and after as I am not you.

And in turn you aren’t me, nor could you fathom the extent of my feelings either.

Still though maybe you are a mom, who just simply having a bad day, who took it out on another mom. I get it as another mom, I have my bad days, too.  We all do.

Wishing for #moms to show more kindness and be more openminded. #parenting

But the bottom line is we are both moms of young kids that should be trying to work together to build up and help our kids, as well as each other instead of trying to tear each other down in the process.  This is my simple, but grand wish and for all moms to show more kindness and to be more open minded to each other.

Simply one mom to another