My eyes were quickly fading and quiet was filling my sleepy ears. as I could feel my head slowly becoming one with my pillow even though we were trying to catch up on the latest HBO Series, Togetherness, on HBO On Demand.

Just as I was giving into the day’s exhaustion, I was startled out of my almost slumber as I heard what sounded like a weird cough coming from my girls’ bedroom.

Upon inspection, my worst fears were met with my younger daughter’s eyes wide open laying on her back in her bed, who began to gag, then full-on retch.

I sat her up as quickly as my sleep-muddled brain processed what was happening.

As she regained a sitting position, it was like turning on the shower faucet at full speed with all her past night’s dinner and dessert coming back up all at once.

The smell, immediately, got caught in my throat and had to do my best to keep my gag reflex in check.

Not only were the Frozen blankets and bedding covered, but so was the floor, as well as the child that just spewed the full contents of her stomach.

I did what any mom, who doesn’t do puke would do.

I called out to my husband for his help, as no amount of faking was going to get me through this catastrophic mess. 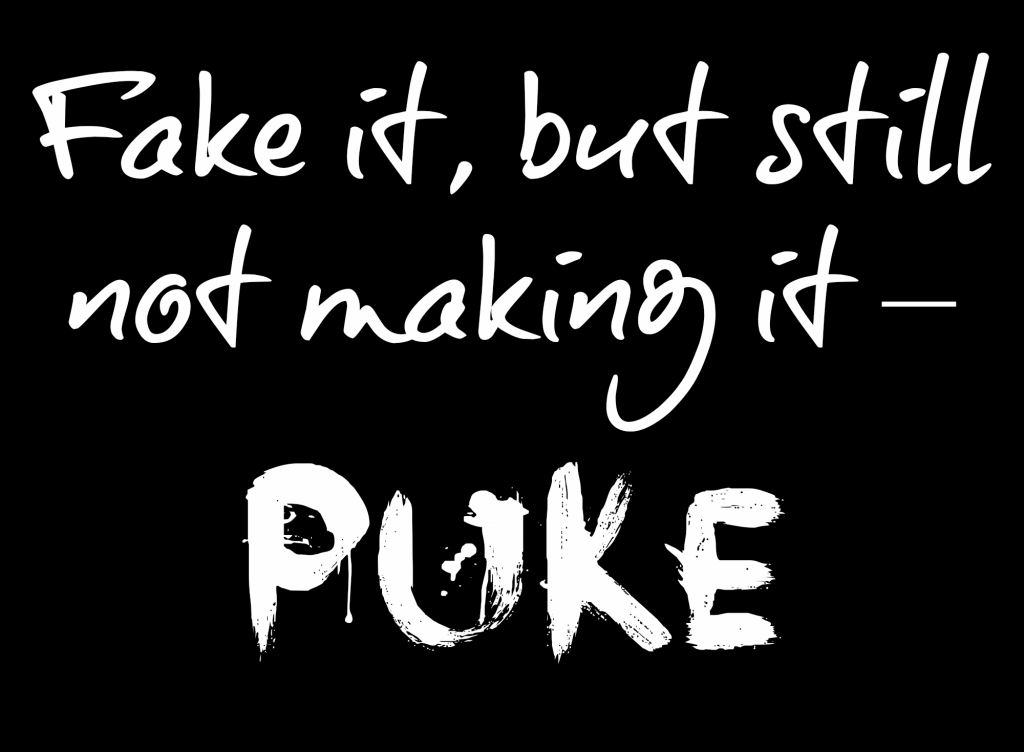 As I watched, my husband very carefully lift our 4 year old out of her bed, bring her into the bathroom, undress her, and even wash her body and long blonde hair; I was overwhelmed with the not so proud realization that for all my proclamations that I am her mom and would do anything for her; I am a fake and fraud when my scared 4 year old is down and out from the most dreaded stomach bug.

Don’t get me wrong, there is a lot that I am capable as a mom, including poop mishaps, but still full fledged vomit is where I draw the line and can’t fake it until I make it.

Six plus years as a mom and I still unable to FAKE taking care of a child coated in regurgitated food.

Hell, as I am writing this, the hair on my arms are standing fully erect, as well as my stomach’s churning reliving this recent experience.

I am not too proud and yet still more then slightly embarrassed to admit that this mom is puke phobic.

Yet I wasn’t good for much, as my child needed to be cleaned up.  I barely could stand to be 10 feet away from her without the gag reflex once again taking hold of me, as much as I tried to fake it.

Once she was indeed cleaned and redressed, the lovely pleasure of styling her beautifully tangled hair was bestowed upon me, which only made her cry more, because this is the same kid that hates the slightest knots having to be tended to now had them galore.  Even the leave-in conditioner that should help with this hairy situation was having trouble doing its supposed job.

Again I would be a fake, if I didn’t disclose that I lost my patience and raised my voice as she cried out in pain from the brush being used to detangle as I was drying her thick mane, while my husband was now onto stripping and remaking the bed with clean bedding.

I could not have felt more like a fake and fraud as the compassion that most moms should have at this point was escaping me, but seemed more like I was channeling Joan Crawford as the new, meanest mom on the block.

All said and told, she was now squeaky clean head-to-toe (unknotted hair included), proclaiming that her tummy wasn’t hurting anymore and still didn’t have a fully clean bed to go back to sleep.

Still, with my best academy award performance, I continued my best to fake that my skin wasn’t crawling from having to transport the clothes and bedding that contained the blown chunks to begin a load of repugnantly, smelly laundry that her father just removed from her bed.

Finally, her bed was fit to be slept in once again.

Where was our 4 year old at this point?

We found her comfortably passed out in our bed on the same fluffy pillow, where my original groggy head was heading to a final state of sleep for the night right before the technicolor yakking commenced.

Irony at its best and not faking while I say here that as peaceful and small as she looked in our bed at this moment, I was now more exhausted then before she tossed her cookies that night.

But at least the grossness of her most recent vomiting episode was behind us, until the next time or until I myself sadly caught this bug days later (that is another story for another time).

Yet, I could say I will do a better job to fake my fear and loathing of my kids’ losing lunch (or dinner) antics, but think I know better then to say this as then I would be the biggest fake of them all.

The words for this week are: Fake or Quiet; Please feel free to linkup and join us this week.