Even though we are knee-deep with the Coronavirus crisis here in the US, Easter and National Jelly Bean Day is still coming up fast. With over 200 flavors of jelly beans out there in the wild, I thought it would be a fun diversion to find out which are the best ones in each state and the whole country. As luck would have it the Candystore.com compiled the results and I couldn’t resist re-sharing here to lighten up the mood a bit.

Take a look at the fun US map below to check out which Jelly Beans are ranked favorite in each of the 50 states. Plus, see if you are in agreement with the top three choices in your own state with the interactive map below (scroll over to see for yourself). I mean I know my favorite Jelly Beans flavor. Do you know yours?? Have fun now!!

Source: CandyStore.com.
Now, that you have checked out the breakdown by state, candystore.com also came up with a list of the National 21 Jelly Beans Flavors overall in the US.

Check those out below, as well:

Cinnamon has made steady progress towards the top. Up from the #3 spot 2 years ago, this spicy red jelly bean flavor is part of a trend of spicy candy we noticed a while back.

Things have sure been heating up for Cinnamon jelly beans. Sour candy, spicy candy, savory candy are all becoming more and more popular. In fact, the top 3 jelly bean flavors do not include a sweet or fruity flavor at all!

Salty and buttery, Buttered Popcorn was riding high last year, keeping its crown after knocking Black Licorice off the top sport 2 years ago. It has now been knocked off itself by a controversial up and comer, cinnamon. Both flavors incite strong opinions, positive and negative, but in the end, Buttered Popcorn has work to do to become the number one jelly bean flavor in America again. 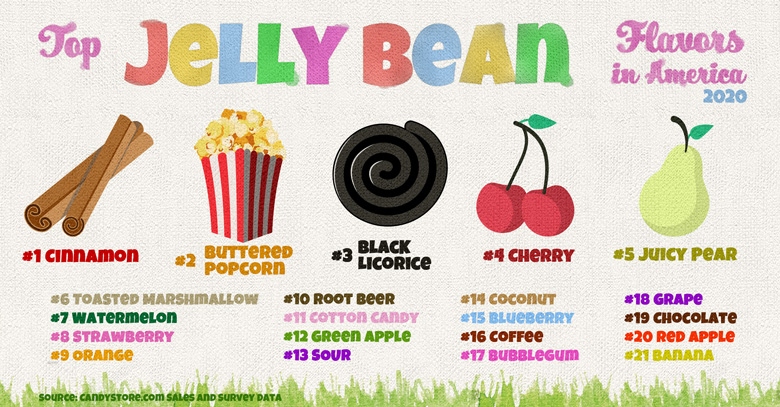 Black Licorice has slowed its descent for now. It had been on a losing streak, falling from the #1 spot 3 years ago. Then it fell to the runner-up, and now it’s just trying to stay on the podium. But has maintained last year’s #3 spot this year.

Still, the number three spot is very near the top and there’s no denying the immense popularity of black licorice jelly beans. They are polarizing to be sure, but enough people still love them to push them above what was traditionally the top jelly bean flavor in the western hemisphere: cherry.

Cherry is like the jelly bean elder. It has been around for a long time and was once the king of jelly bean flavors, reigning for more than 20 years. It’s no longer in the top 3, but perhaps its time has not yet come.

Cherry was #4 last year as well. Maintaining its place on the charts is impressive for a sweet fruity flavor in this new savory/spicy world we live in. Only time will tell if Cherry can reclaim a place on the podium, or fall back into the fray of other fruity flavors.

Juicy Pear is sort of a new classic jelly bean flavor. It has reached a high level of popularity in a relatively short lifespan. This year it even took over as the #1 flavor in Washington, Wyoming, and Alabama!

Toasted Marshmallow moved up 1 spot from #7 last year. The toasty flavor warms the heart and the belly. It’s a great flavor to complement other flavors and cut through some of the super sweet fruity flavors with a more creamy and slightly savory taste. It, however, is not the top flavor in any one state.

Watermelon fell 2 more spots to number 7 this year. They are popular coast to coast and were mostly the victim of Juicy Pear and Toasted Marshmallow moving strongly up.

Strawberry jelly beans are coming on strong. They jumped up another spot this year from #9 and are now solidly a Top Ten jelly bean.

Orange flavor fell another spot this year after getting jumped by Pink Strawberry. Orange has held strong as a classic jelly bean flavor to remain solidly in the top ten. It even took the top spot in Idaho!

Maine’s new favorite flavor, Root Beer, is moving up fast. Jumping 2 spots to make the top ten this year, it has moved 5 spots up in 2 years.

That’s some big moves for a classic flavor and could be another signal that non-fruity flavors are headed for a recession.

Cotton Candy may not be top ten, but it continues to knock on the door. Holding its ground at #11, this fair ground-inspired flavor is all sweetness without the fruity. For some people, it’s the perfect combination of sweet and no citrus. But not for enough people to get it into the top ten. Yet.

A Green Apple jelly bean a day keeps the doctor away. Probably not, but Green Apple is reeling now after dropping 2 spots for the second year in a row. From #8 two years ago, they now find themselves at #12. A classic old school jelly bean flavor, Green Apple can still hold its head high as a top 12 flavor.

Sour flavored jelly beans have made a big splash this year, moving up from #18 to #13 most popular flavor. They were #1 in New York and now Nebraska too! It’s no secret that New Yorkers love sour candy.

On the other hand, non-fruity flavor Coconut is moving in the other direction. Coconut was a top ten flavor last year and dropped all the way back to #13.

Blueberry jelly beans, the flavor they invented specifically to make the blue in red white and blue, has fallen another spot to #15, down 2 spots in as many years. Useful for their blue color, which is a popular color for event candy, blueberry jelly beans may struggle to differentiate themselves from the crowd of fruity-flavored jelly beans.

Coffee fell one spot overall this year but did gain the #1 spot in 2 states Nevada and Oklahoma. Coffee, the drink, has never been more popular, and coffee-flavored treats and gifts are on the rise. Coffee flavored jelly beans are no different, making strong moves and mixing it up with various flavor varieties like latte and espresso (which we lumped together).

Bubblegum flavor fell 1 spot from #16 last year, making it a 3 spot loss over 2 years. So bubblegum is in a downtrend. This may reflect a trend towards less sugary flavors and more savory and spicy ones. Similar in color and flavor to Cotton Candy, it’s moving in the opposite direction. Could there be a zero-sum game between them?

Grape moved down a spot from #17 this year. Purple is a strong color and is an asset to Grape jelly beans. Purple is one of the most popular candy colors and there are not many other purple flavors.

Chocolate jelly beans moved up one spot from #20. Chocolate lovers might not be rejoicing at such a minor move, but they did claim the #1 spot in Illinois again!

Red Apple fell back a spot to #20. Red Apple has done well to stay moderately high even though its greener brother is the more famous of the apple flavors.

Banana flavored jelly beans moved up into the top 21 at #21. Banana is a classic candy flavor that isn’t super traditional for jelly beans, but the popularity of Jelly Belly has made it more prominent in recent years. 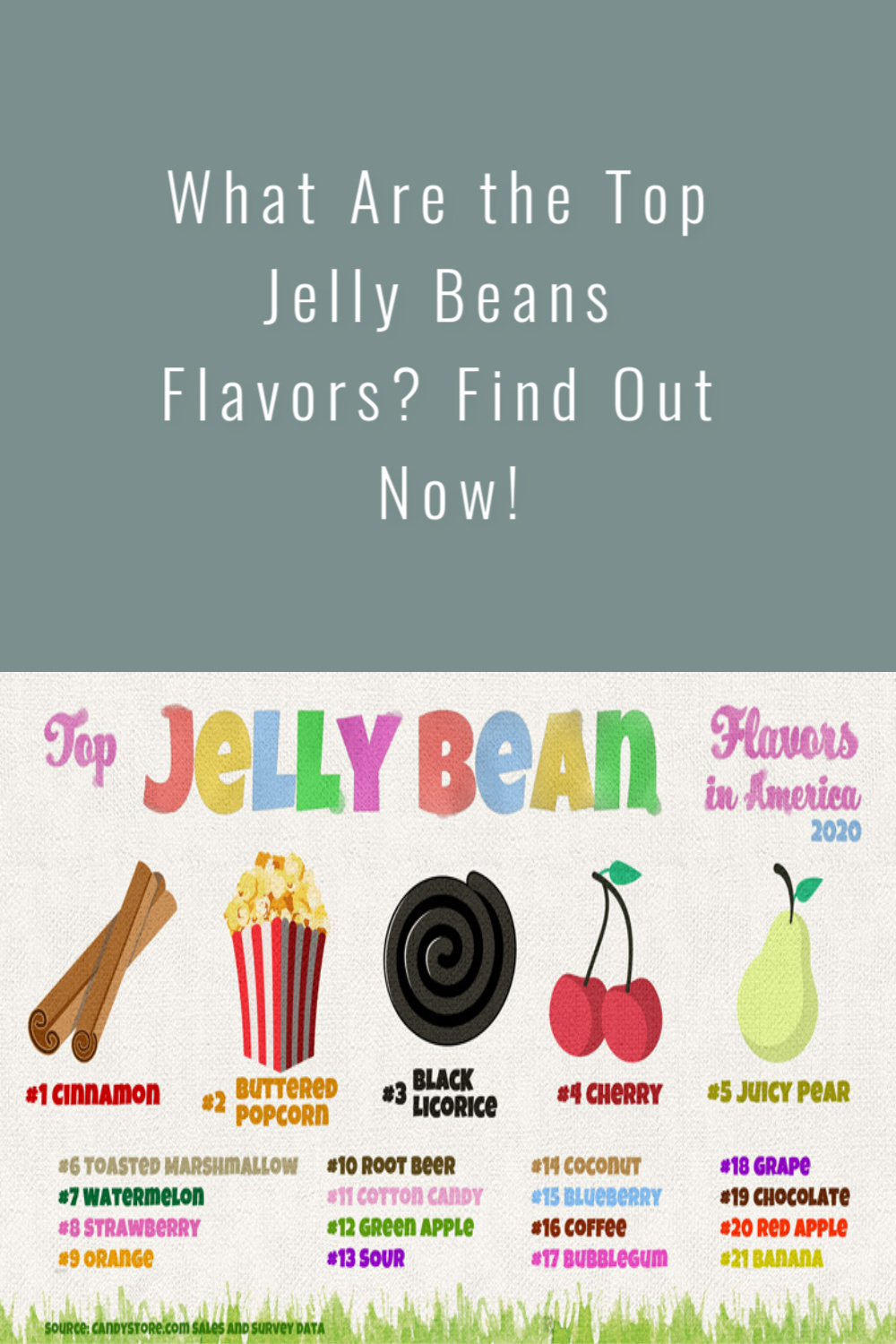