As losses go, I have dealt with a lot of the years and think I have managed quite fine (some have even been for the better).  I lost loved ones and yes, I have grieved over them (some longer then others, depending upon how close I was with the deceased).  In my youth, I lost boyfriends and dealt with that as best as I could.  I even lost a few friends along the way, too and bounced back.

I lost my single days, the day I said “I do”, which was probably one of the best losses I could have ever had, because I truly do love my husband and am glad to be along for the crazy ride with him.  If I had to be in it with anyone, I am truly glad it is him.

I lost my sleep the day I became a mother.  Seriously, what mom doesn’t, but Emma had colic, so sleep was truly a rare commodity around here.  As that leveled off, she began to teeth and then when she wasn’t even 8 months old, I found out I was pregnant with Lily.  Talk about a shock to my system.  Once I did get over the shock, I now lost my skinny waist again for the second time in less than two years time. 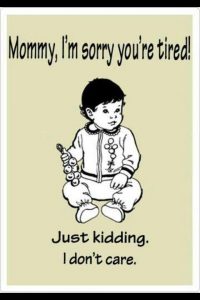 Not Sorry for No More Naps…

But all-in-all, she was a blessing in disguise and from the moment we brought her home, she was a sleeper at night.  I literally would have kissed Jesus himself if I could have to thank him for that miracle (Hey, sleeping babies were a rare commodity in our house!).  But because she was a good night sleeper, she was not a good napper as a baby.  In those infant days, she would cat nap for twenty minutes at a time.  After twenty minutes, she be awake and raring to go.  She never wanted to miss anything or so it would seem.

However, once she was old enough to cut her nap down to one a day, she did at least seem to sleep for an hour or two and so did Emma, who was napping at the same time with her .  Does anyone know how a mother feels like when she gets an hour or two of peace and quiet during the day?  This one felt like she had won the lotto.  No joke, I was ecstatic to have even an hour to myself.  This was the hour that I started to write more, when I first started Hubpages (yes I know I could have done anything, but I love to write and it truly relaxed me).

This past fall, I lost my first ever napper, Emma.  She started pre-school, even though she didn’t nap anymore on those days, she was gone for over two hours in the afternoon and Lily still would nap.  So all was still well with the world.  I even was still able to use this time for writing, such as blogs, Hubpages and even NaNoWriMo in month of November.

But, now it is January and the last few days, Lily has been falling asleep for her nap, but waking up crying after twenties minutes.  Nothing is physically wrong with her and once she calms that is it for the nap.  So, for all intents and purposes, I think we may be losing her nap an she only just turned two.  Like I have said, I have lost so many other things over the years, but seriously so not ready to loss nap time.

If we do lose this nap, I may just cry, because this was my time to not only get stuff (like writing) done, but to re-charge my batteries so to speak, because lord knows a person can only take so many hours of screaming, crying, whining and tantrums without some kind of incentive, like a nap.  I love my kids, but I think I may have loved nap time just a bit more and will be mourning this for years to come now!!