When it rains it pours! During the month of December with the holiday season completely upon us and Christmas literally less than 20 days away, everyday I seem to be doing something else to get prepared and make sure that I don’t forget anything.  This is why I am truly lacking motivation for finishing my novel and other writing projects.  I won’t get into that again, but in case you missed it, you can read about that here.

Today, though I finally got our Christmas Card done and printed (one less thing I need to do).  For those, who don’t remember, I was so very fortunate to have won a custom designed Christmas Card from a contest being run on my friend Meredith’s blog The Mom of The Year from kreations by kristy.

This card contest win was back in November, before Thanksgiving, but we actually didn’t have our appointment for holiday pictures at Target until Friday, December 7th, when Kevin had off from work.  Thankfully Kristy told me just to contact her when I did have our pictures and she would create the card for me then.

By the way, no amount of money in the world could get me to take my two girls to get professional pictures taken by myself.  So, that is why this outing was contingent on Kevin’s schedule, because I have learned that I need another set of hands and preferably the ones that helped to create them!

One thing led to another and Kevin wasn’t going to be able to take off from work on December 7th, after all. At the last minute though, I had to reschedule with Target, because of this and believe it or not, I was able to get an appointment on last Thursday for the next day (Friday).  Kevin switched his day off for that day instead and all appeared to be well with the world.

Thursday night (he night before), Emma and Lily were playing together.  Lily had something Emma wanted.  So of course, she grabbed for it and apparently pinched Lily’s face when she wasn’t getting her way.  That one little pinch left a lovely mark on Lily’s cheek.  Why oh why do my girls always seem to hurt themselves and get marks on their face the day before getting professional pictures taken?

I couldn’t cancel the appointment though again, because I was not sure when I would be able to reschedule with them and needed these pictures to truly get working on this year’s Christmas card.  So, Friday morning we took them to have the pictures taken and they came out amazing.  Both Emma and Lily were better than I could have imagined and do credit this on Target’s photographer, who was truly amazing with little kids. 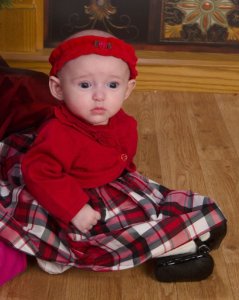 I should know about horrible photo shoots, because we have gone to a few different studios (including JC Penny’s and The Picture People) and they were not nearly as good with my girls.  The worst was at JC Penny’s, back in 2009, when they made us wait for over an hour to have pictures taken after having made that appointment a month in advance.  This was our first year taking professional holiday pictures, because it was Emma’s first Christmas.  She was 4 months old and a cranky colicky baby, who if she missed a nap would be a hot white mess.  Well, the hour wait put us right into nap time and she was truly an absolute disaster.  I didn’t get one damn shot without her crying, screaming or pouting.  The photographer offered for us to come back, but to be honest I just couldn’t stomach going through that again.

However, this time out truly went pretty smoothly and was amazed at just how easy it was.  They took us immediately once we got there and the pictures didn’t last more than 10 minutes, which was just enough time to keep my kids interested, but not too long that they got bored or antsy.

Then, came the time to pick out photos.  I was there with the young girl who works there for over 45 minutes (Kevin took the girls to the Toy department to keep them occupied), when she suggested just buying the CD, because I could photoshop the bruise on Lily’s face out and then print what I wanted without it that mark.

Also, in the process it came up that I blog. Guess what?  She blogged also and even talked about putting photos like these on her own blog.  Small world, that I get the girl in Target who blogs, too!!  And of course, I could talk and relate to anyone as I have already mentioned here. Anyways, she honestly made a valid point about the CD.  So, in the end, I purchased the CD and got a free 8 x 10 family portrait, too. 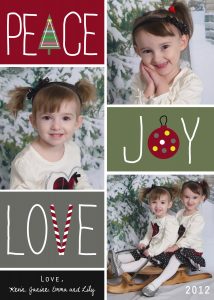 Here is Kristy’s Creation and Our 2012 Christmas Card..

Fast forward to this this week and I was able to pick up the photo CD with all our pictures on it.

I, then, photoshopped Lily’s pictures like I mentioned earlier.  Next, I contacted Kristy, who couldn’t have been nicer.  I sent her the three photos I wanted to use and picked out a design off her Facebook page.  She did the rest by putting the photos in and even changing the background slightly to match the colors my girls were wearing.

The final card and design were amazing.  I truly can’t thank Kristy enough.  She is so very talented and her work is so beautiful and professional.  I took her digital JPEG file and uploaded it to Shutterfly and made over 50-5×7 photo print copies for Christmas cards.

Now that that is done, I can get to work on more important things, like possibly getting my novel finished, because Lord knows I need to get my mojo back, as one of my blogging friends put it so nicely.  Well, at least until my cards arrive and I need to address, stamp and seal the envelopes!