*I was supplied with a free Quarterly YA subscription box to review here. All opinions are my own.

In recent times, I have shared on my monthly book review posts that I enjoying YA novels more and more lately.

Feed your YA novel reading with @Quarterly #ad

Therefore, it makes sense that Facebook kept showing me an ad for Quarterly. See my Goodreads is linked with Facebook. So, Facebook can see my reading preferences. 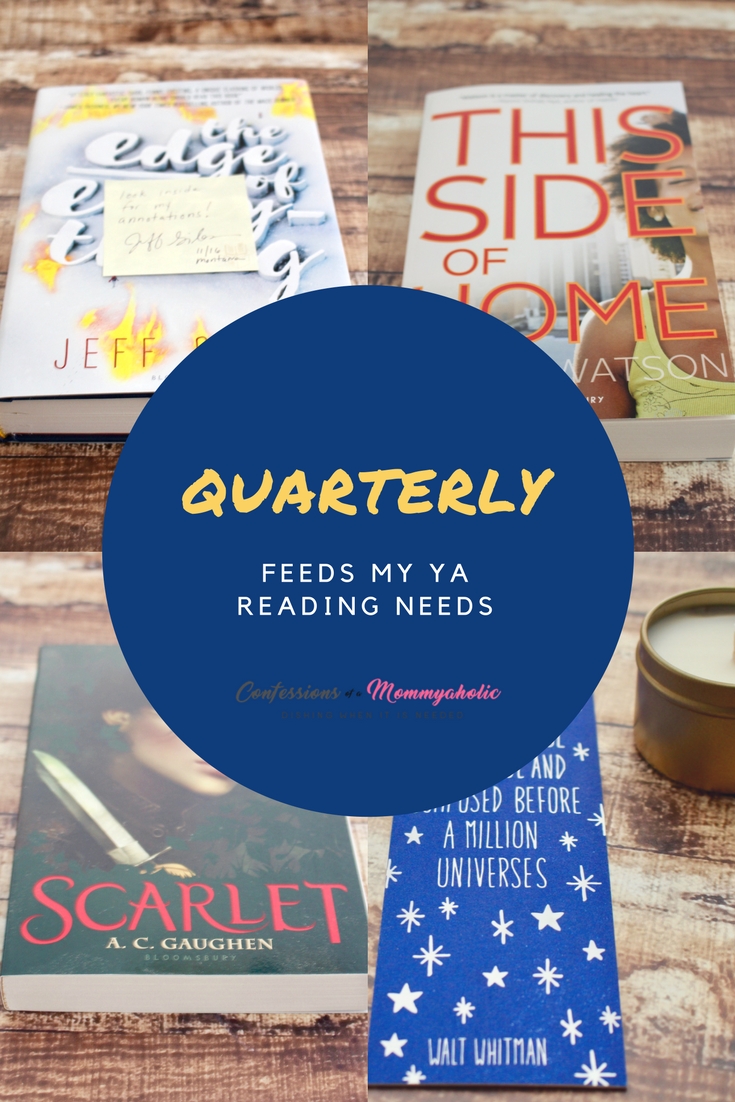 What is Quarterly subscription?

It is a subscription service that delivered directly to your doorstep quarterly.

But what makes Quarterly special?

For starters, the name “Quarterly” means it comes to you quarterly or every three months not monthly. I know many subscription services you need to keep up monthly. But in Quarterly, you receive three books not one. 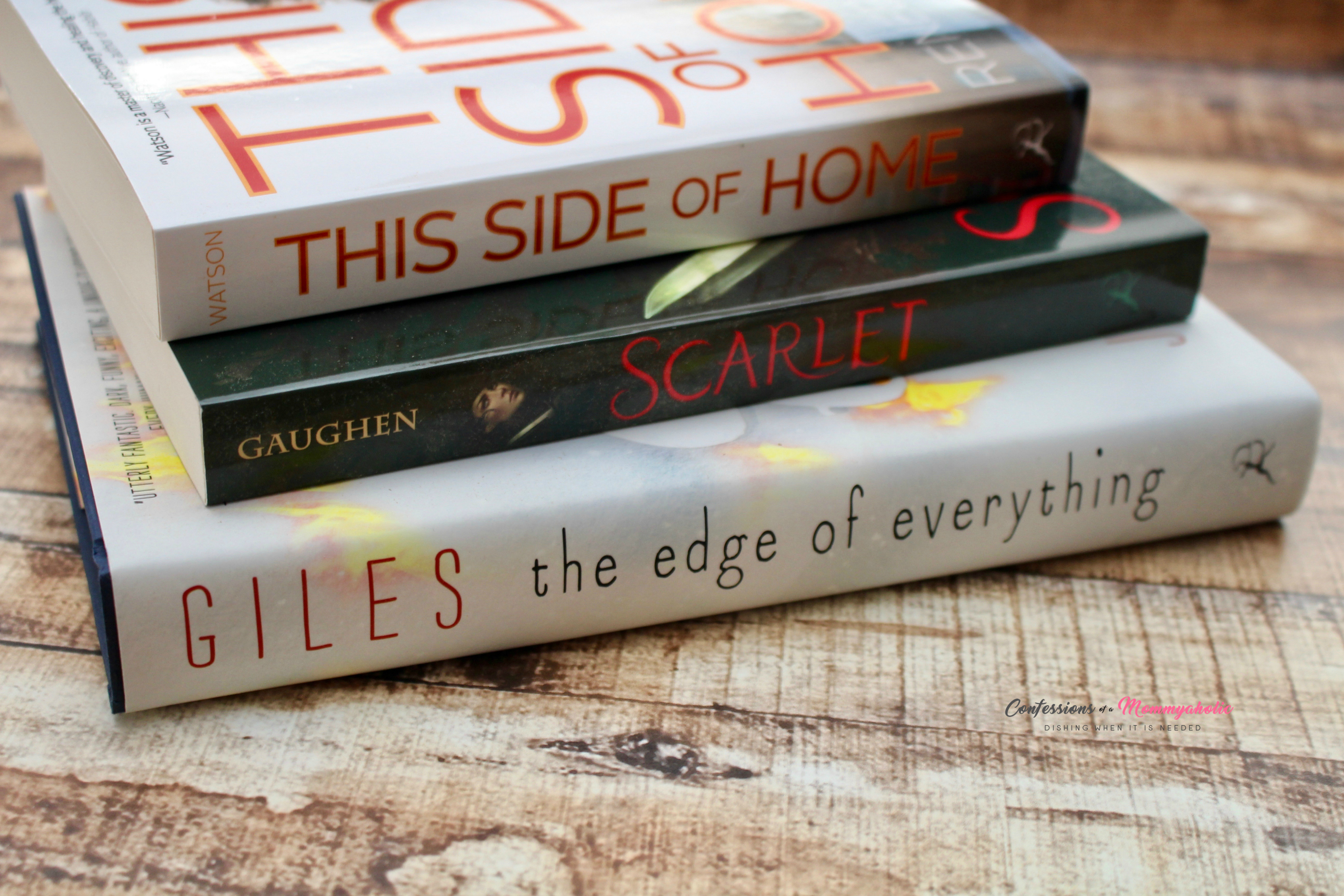 One of those books happens to be a brand new release annotated by the author with hand-written notes. Seriously, the notes are custom post-it notes that tell you all sort of tidbits from the author. So, it is like getting a backstage glimpse and peak into the author’s thoughts throughout the novel.

The box also contains two more curated YA novel titles. These titles compliment the brand new author’s release with the author explaining nicely in a letter to you why they chose these books to accompany theirs.

Plus, the box is rounded out with some delightful bookish goods, such as bookmarks, candles and/or even fake tattoos.

What was included in my 1st Quarterly subscription box?

♥ Newly released YA Novel – The Edge of Everything by Jeff Giles

Goodreads synopsis: For the perfect love, what would you be willing to lose? It’s been a shattering year for seventeen-year-old Zoe, who’s still reeling from her father’s shockingly sudden death in a caving accident and her neighbors’ mysterious disappearance from their own home. Then on a terrifying sub-zero, blizzardy night in Montana, she and her brother are brutally attacked in a cabin in the woods—only to be rescued by a mysterious bounty hunter they call X. X is no ordinary bounty hunter. He is from a hell called the Lowlands, sent to claim the soul of Zoe’s evil attacker and others like him. X is forbidden from revealing himself to anyone other than his prey, but he casts aside the Lowlands’ rules for Zoe. As they learn more about their colliding worlds, they begin to question the past, their fate, and their future. 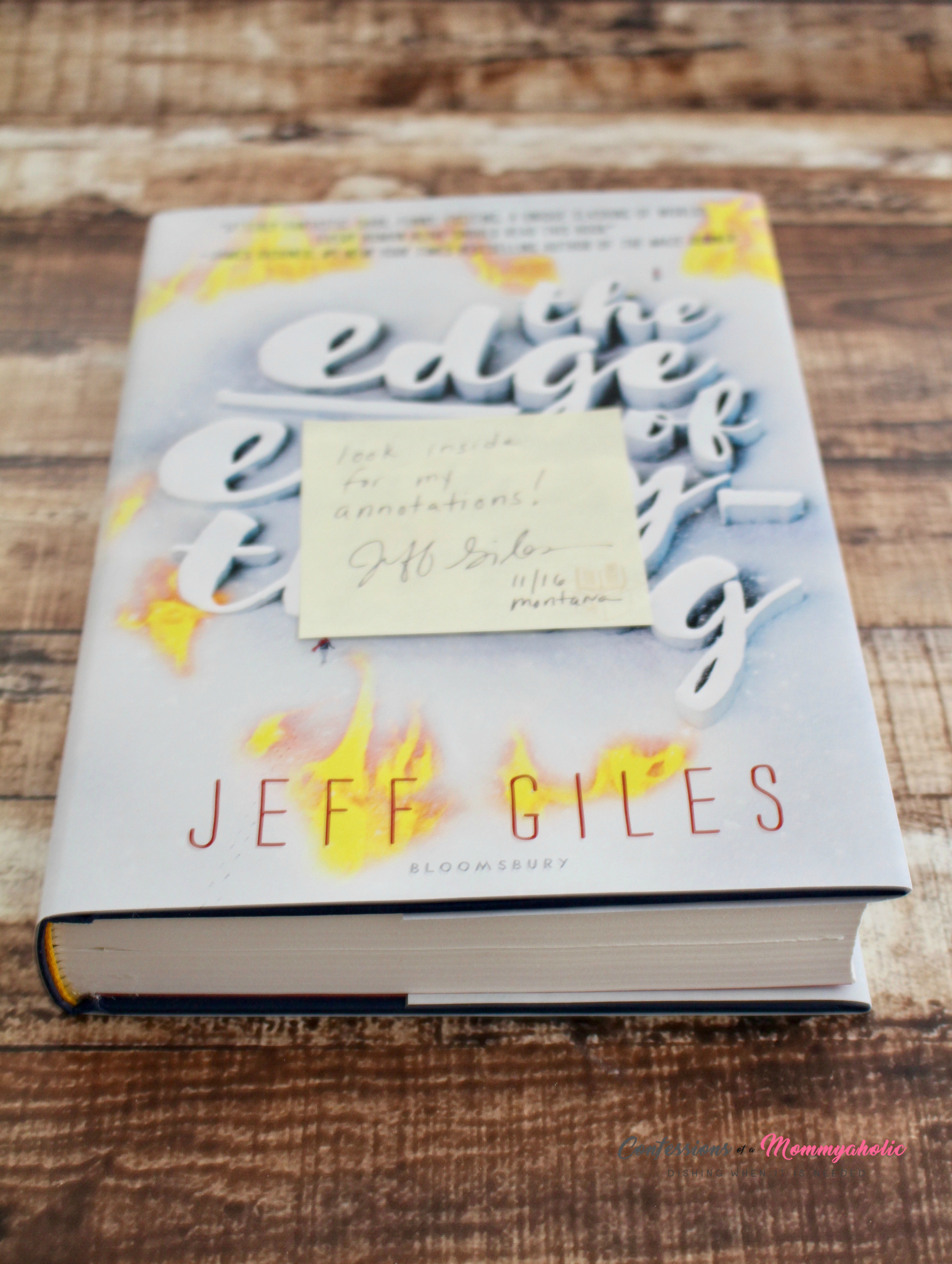 ♥ This Side of Home by Renee Watson

Goodreads synopsis: Identical twins Nikki and Maya have been on the same page for everything—friends, school, boys and starting off their adult lives at a historically African-American college. But as their neighborhood goes from rough-and-tumble to up-and-coming, suddenly filled with pretty coffee shops and boutiques, Nikki is thrilled while Maya feels like their home is slipping away. Suddenly, the sisters who had always shared everything must confront their dissenting feelings on the importance of their ethnic and cultural identities and, in the process, learn to separate themselves from the long shadow of their identity as twins.

Goodreads synopsis: Will Scarlet is good at two things: stealing from the rich and keeping secrets – skills that are in high demand in Robin Hood’s band of thieves, who protect the people of Nottingham from the evil sheriff. Scarlet’s biggest secret of all is one only Robin and his men know…that she is posing as a thief; that the slip of a boy who is fast with sharp knives is really a girl.

The terrible events in her past that led Scarlet to hide her real identity are in danger of being exposed when the thief taker Lord Gisbourne arrives in town to rid Nottingham of the Hood and his men once and for all. As Gisbourne closes in a put innocent lives at risk, Scarlet must decide how much the people of Nottingham mean to her, especially John Little, a flirtatious fellow outlaw, and Robin, whose quick smiles have the rare power to unsettle her. There is real honor among these thieves and so much more – making this a fight worth dying for. 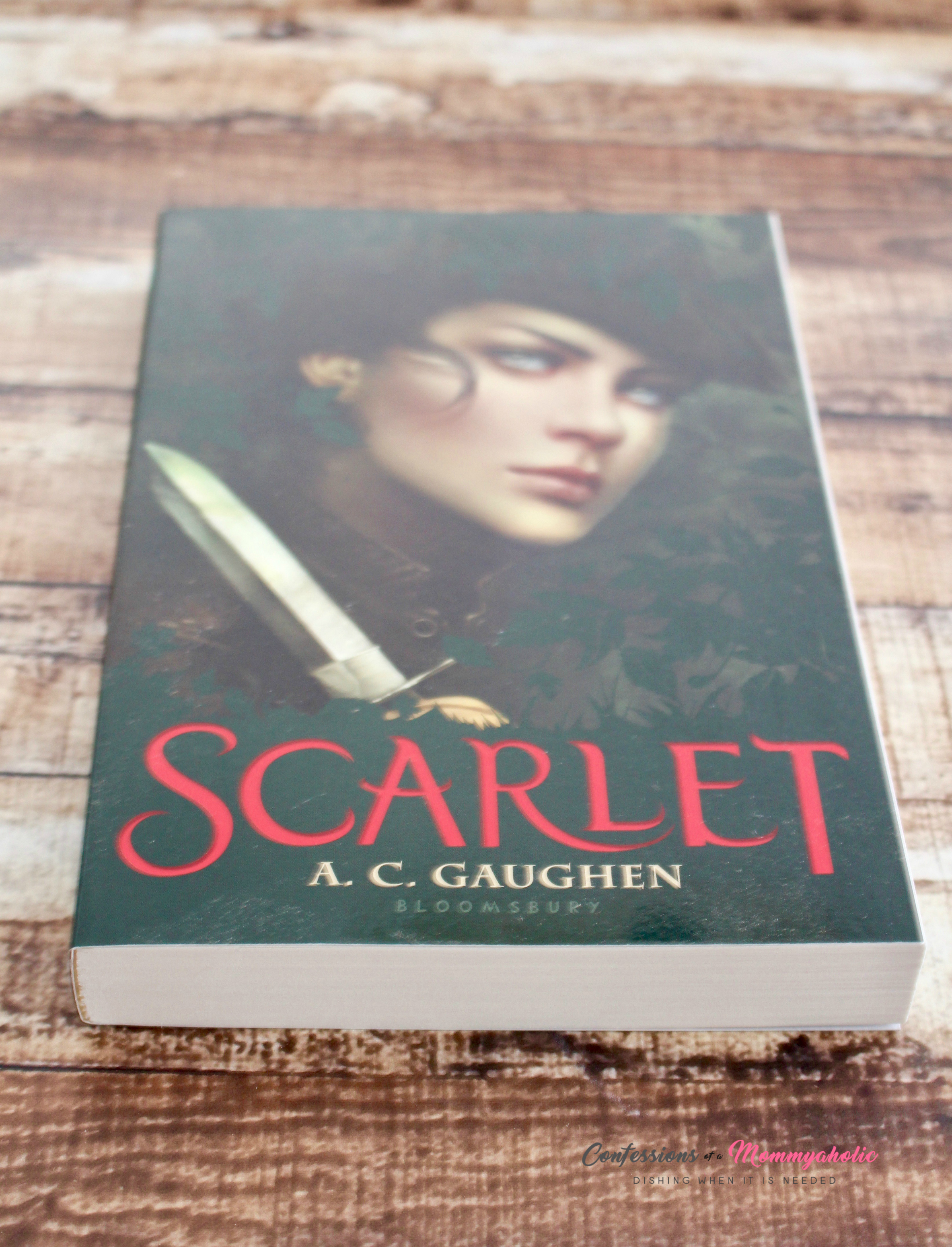 ♥ Personalized Letter from the Author

This box was rounded out with a three page letter from author, Jeff Giles to explain exactly why he included all of the above items in this edition of Quarterly. 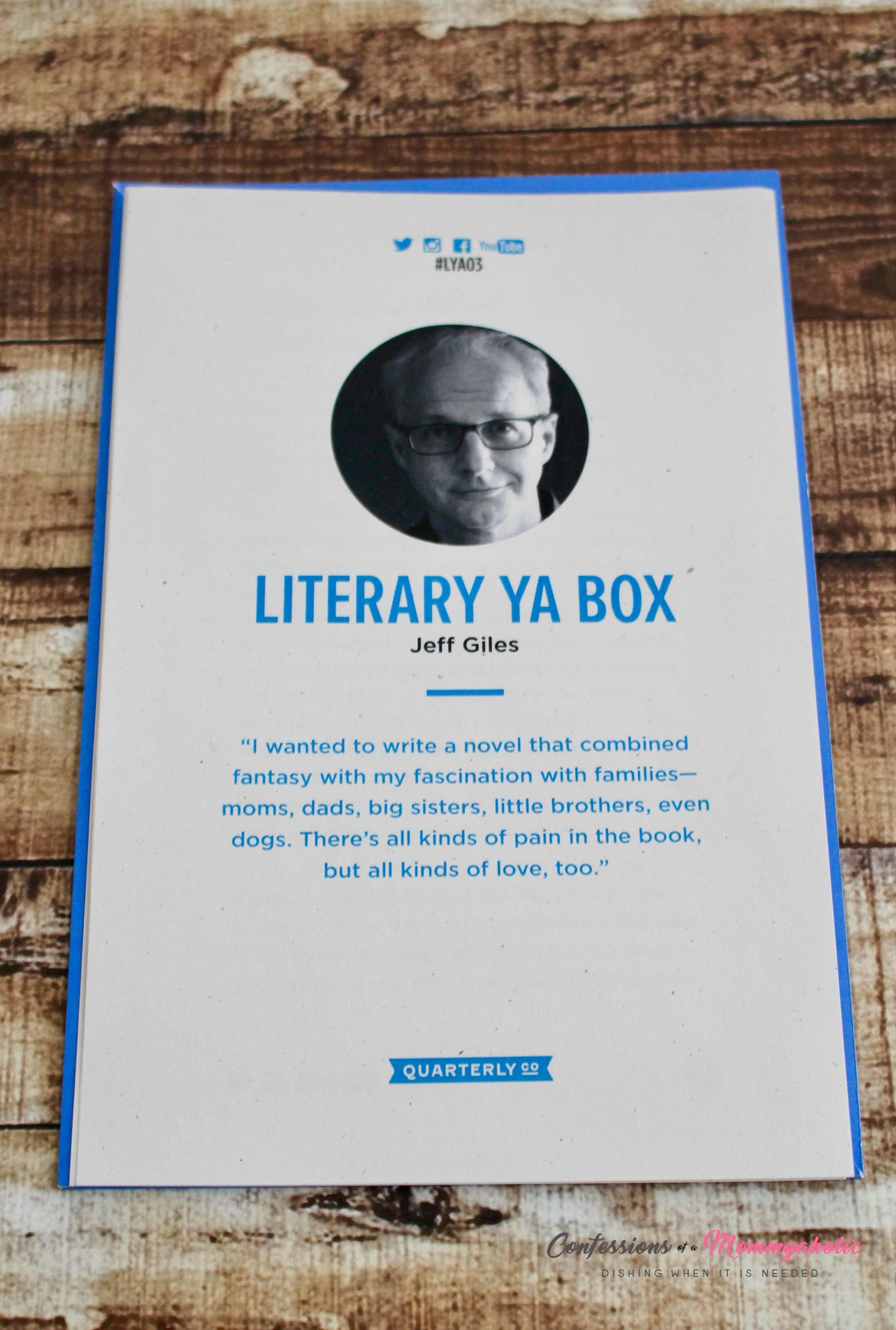 How much does Quarterly YA subscription cost?

Quarterly YA subscription costs $49, which is like $17 per month. The newest Quarterly will premiere April 2017 now. The new titles will be released on or around March 28th!

Want to win a WHOLE YEAR of LITERARY BOXES?

Right now, Quarterly is having their biggest giveaway yet with a grand prize of a year-long subscription to the Literary Box! 10 additional winners will receive a Literary Box of their choice.
To enter, visit the following link and enter your email: http://on.qrtr.ly/winayearofbooks

Thanks once again to Quarterly for the FREE YA subscription box to try out. I now have three new YA books to add to my list to read.

Do you enjoy YA Novels?

Have you read any of the above titles?