“Rise of the Jack o’Lanterns at Old Westbury Gardens is a nighttime spectacle in which 5,000 carved jack-o’-lanterns, some made from pumpkins and some from foam, illuminate a path around the historic premises. The trail is roughly a half-mile long and takes 45 minutes to an hour to traverse.” 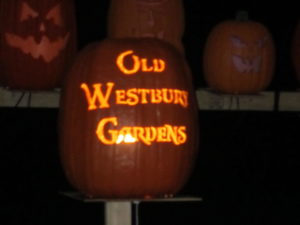 Old Westbury Gardens–This One Speaks for Itself…

This above was written in a recent article in the New York Times.  I had actually never heard a thing about this, until my mother-in-law mentioned it to us about a month ago.  From that conversation, we all decided to get tickets and see what all the commotion was about.

For those who don’t know, my husband is one of four kids and the immediate family on that side consists of his parents, my husband, myself, our two kids, his three siblings, their spouses and then each his siblings have two kids a piece (and a partridge in a pear tree!); making the immediate family come in at a whopping 18 people (adults and children included).  So when we get together, which is pretty often; we have our own mini party! 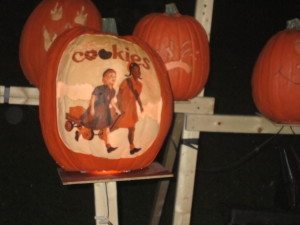 Well in the end we all decided to do this event on the Sunday of Columbus Day Weekend, because most of the working folk in the family had off on that Monday.  Of course the weather predicted for Long Island, NY for days before our scheduled outing showed rain and chilly temperatures too.  Mind you Saturday (the day before) was almost 80 degrees and sunny too.  Well, I woke Sunday morning and the sun was shining.  Guess what?  That lasted all of 20 minutes before the clouds were ushered in and rain so began to follow. (At least the weathermen got it right this time, I suppose!). 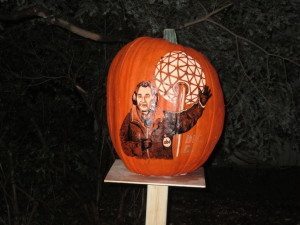 The Famous Dick Clark Showed Up for the Event!!

Neither of my kids had rain coats or galoshes that actually fit them (having outgrown the ones from this past spring) and to be honest I was planning on most likely needing snow boots/jackets before needing the rain gear again.  So I very much neglected purchasing these items recently.  So while I made lunch for the girls today, Kevin ran out and purchased two rain coats with linings in them for the girls (thankfully on sale, plus extra coupons at Carter’s).  And after going through some old clothes, I did also find some Ugg type boots that still worked for the girls too. 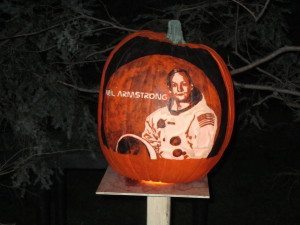 So now thankfully we were set for the bad weather.  We ate dinner and as we were heading out the weather actually didn’t seem too bad (no rain in sight).

We got to Old Westbury Gardens and still no rain.  As soon as we handed our tickets in wouldn’t you know it began to mist.  We made it through 3/4 of the pumpkin displays and the rain wasn’t too bad, but at the ‘Grand Finale’ as those who run the show call it, the skies opened up and it just began to down pour.  We couldn’t walk fast enough to get out of the last maze of pumpkins and the gardens to indeed find our car and escape the rain to go home. 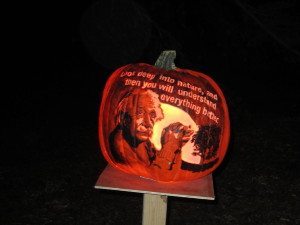 And Even Einstein Made an Appearance!!

I will say this the pumpkins and the whole show was absolutely magnificent.  It was totally a shame about the weather, but still did get some amazing photos of these lit up Jack o’Lanterns that I have tried to share a few throughout this post.

If you do live in the local NY area, I would definitely recommend you looking into this show, but do be prepared that the show goes on rain or shine (as our experience did prove).  Also the tickets are selling like hot cakes, so anticipate that you may have to take whatever you can get at this point.  But again take it from someone that has been there and done that, it is totally worth it; as you can see the pictures above speak for themselves too!!  Last, but not least my kids had a blast and loved all the pumpkins, plus my little one could not get enough of the rain hitting her little hands (it is truly the little things in life that still give her pleasure!).  By the way, they completely wore themselves out and went to bed as soon as we got home and didn’t hear a peep from them since (so a win-win in my book!). 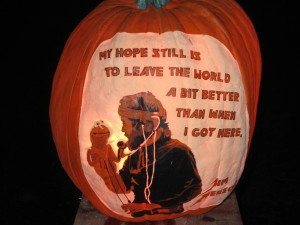 Tickets are available at therise.org.