“No, she is doing the retake today,” I answered.

“But Kevin said she wasn’t, when I talked to him last night,” she responded to me. 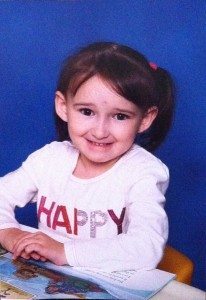 “I know he doesn’t know, because he didn’t think it was necessary, but she wasn’t even smiling in those pictures. So, I am just having her retake them and then tell him when we get the pictures back,” I explained.

“Well, now you are finally learning. What he doesn’t know won’t hurt him!,” my mother-in-law told me quite easily.

So that probably sounds awful, but it was just a lie of omission. I know it was still a lie though, but the original pictures were pretty bad. Emma wasn’t even smiling and looked almost like a deer caught in headlights.

We have had pictures taken in the last year professionally at Target twice and the pictures came out absolutely beautiful. I probably sound prejudice, but seriously she was all smiles and even posed the way they told her to pose.

These pictures though were your classic school pictures that most kids dread looking back on. I bet you have a few of them. Hell, I have my fair share! My mom has them altogether in brag book that has many of my school stuff, such as awards and stuff (yes I was a smarty pants back in the day). I can tell you right now off hand one in particular that I wish was never taken. I was in kindergarten and my mother put me in this pink outfit. It was so light in color and looked like pajamas. Then came the awful hair pictures from bangs to no bangs, to stick straight to perms–I did it all with my hair and rather wish I hadn’t!!

So, when I saw this picture of Emma, I felt for her and didn’t want her to have this as evidence of her first ever school picture. I talked with Kevin about this, but as a guy it truly didn’t seem to phase him. And he even did have a conversation with his mom the night before telling her that we weren’t doing the retake (I know, because I heard it and just bit my tongue).

The following day, I made sure to have all the pictures from the school package (I got one of the cheapest by the way) and put them in her backpack. When I went to drop her off, the conversation from the beginning did take place, because my mother-in-law drops my niece off (the girls are the same age and in the same class). My niece was getting the retake, but after how adamant Kevin was with her the night before I couldn’t blame her for asking and being confused. Thankfully, my mother-in-law is usually on my side and got it. She kept her mouth closed and never did say anything.

Flash forward to last night, when I had the new pictures to show off.

I very gingerly opened the conversation up with, “I had to take the picture retake package for your mom yesterday.”

“The pictures were done already. That was quick. How did they come out?”, Kevin asked me.

“They came out fine. By the way, I actually had Emma do the retake too and have the new pictures for her if you want to see them?”, I very carefully stated.

“I thought we weren’t getting them done again?”, he said half questioning.

“Well, she had a weird expression on her face originally and I decided to have her try to retake them. I figured they couldn’t come out any worse,” I added for good measure.

“How did they come out? Can I see them?”, Kevin questioned me.

“Good and she is smiling now. Hang on, I will get them,” I said as I was walking in the other room to retrieve the new pictures. 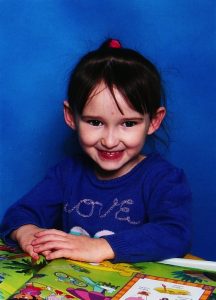 Emma’s Picture Retake–Smiling, But Wearing Purple. You Can’t Win Them All!!

He takes them from me and looks at them. The first thing he asks, “How did they get her to smile so nicely and comfortably this time out?”, Kevin wanted to know.

“I showed her the other pictured we took recently and told her to smile just like that. We talked about this the day of picture retakes all morning and she even told me afterwards that she did just that,” I explained still not sure how she never ratted me out either.

“Well, they did come out pretty good this time, but why did you put her in purple when the background was blue?”, Kevin the artist had to add for good measure.

“Of course you would have something to find to complain about. If it were up to you, we would still have the pictures where she looked scared of her own shadow. And this is what she wanted to wear. Have you ever tried to fight a 3 year old princess diva?”, I said knowing that should pretty much end the conversation, because he knows how she has to always pick out her own outfits.

And there you have it sometimes as a wife you have to lie ever so slightly to get things done the right way even if it isn’t the first time. Even though somehow my shy child and mother-in-law didn’t rat me out, I still didn’t win completely with Emma’s choice of clothes for the day. But in the grand scheme of things I guess at least I have pictures that she is happy and smiling in!  And I now I have a whole year before I have to worry about this one again!!

Two more days of shameless begging for the Circle of Mom’s Contest, which runs through tomorrow.  Please click the button below or the one on my sidebar to vote for me their as well.