Why is that even the best laid plans around here can turn to crap real fast?

The evening truly had so much potential. I made a very nice dinner from a recipe that was on the back of the pasta box believe it or not. It was bow tie pasta that was mixed with garlic, oil, parmesan cheese, sun dried tomatoes and I added black olives for a bit more salty flavor, too. So tasty and actually pretty easy to make and cleanup from after all was said and done.

It was still early enough and thought I would get a jump start on one of the Peeps recipes I wanted to try out for my Easter Peeps Blog Post. I told the girls we would make chocolate covered lollipops with the Peeps if they wanted to help me tonight.

Figuring I needed something to display them on while they hardened, I thought I would try to put together a cake pops display tray I bought awhile back before I actually melted the chocolate to assemble the lollipops. I am not kidding when I tell you the directions for this thing was absolutely ridiculous and I felt like I must have been an idiot, because 30 minutes later I still had the display tray in pieces instead of put together. 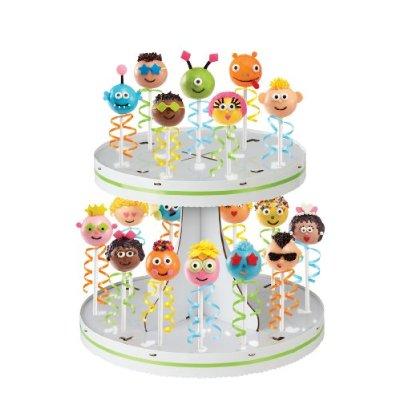 My Cake-Pops Display Tray Should Have Looked This, But Sadly Looked Nothing Like It!!

In the process of putting it together and saying a few four letter choice words under my breath so as not to have my kids hear or repeat, I hear Lily a few feet away whining. I turn around and find her pant leg, specifically her knee all wet. I look down where she is standing and there it is–a trail of clear liquid oozing out of my lower kitchen cabinet. I kneeled down and right away I recognized the smell.

Even though, I haven’t had vodka in some time and even truly forgot we had a bottle of Smirnoff Vodka all the way in the back of that cabinet, I still knew the smell was vodka. As, I reach to grab for it way in the back and pull out the stuff in front of it, more vodka comes leaking out and now a lake of vodka is puddled on the floor.

The Infamous Smirnoff Vodka That Was To Blame!!

Totally my bad that I never moved this bottle, but truthfully hadn’t thought about it since before we even had our girls and now poor Lily smelled like a 100% proof alcohol, because of that, plus the kitchen floor and cabinet was nothing short of a mess.

And thank god for teamwork, because even though we are clearly not happy with the situation at hand and even at each other (yes the blame game goes along way at times like these!), Kevin and I pull it together (I guess love does triumph frustration at times like these). Kevin cleans and mops the kitchen floor, as well as clean/reorganize the cabinet. I get Lily in the bathroom, clean up and change her.

After it is all said and done, I somehow manage to put the damned lollipop/cake-pop tray together. Still not sure how I did it and will not be taking that thing apart anytime soon, because it is pretty clear that it is a fluke that it is completely assembled and will never be re-assembled if indeed taken apart.

By this point it is almost 9 pm and bedtime, but then of course bedtime would entail that my kids actually went to sleep instead of exhausting every excuse possible for at the very least an hour.

Oh well tomorrow is another day and hope to god to have some Peeps desserts to show for this, because I would love some cake with this and be able to eat it, too!!

And if you missed the Easter Peep-tastic Recipes post, catch up here, because I must say it was worth the craziness that ensued the night beforehand!!

And also today, I am featured over at Mommy Writings By Daughter of Maat for my first featured guest post for this month about how I became a WAHM.

Also, don’t forget, that Capa Java is still offering my readers for first time orders for all Keurig needs, including K-Cups and Brewers, 10% off by using the code,MOMMYAHOLIC. Don’t miss out and if you love K-Cups as much as I do, this is an awesome offer!!

And there is still time to enter the Peeps Giveaway and for more information on Peeps Products and special promotion for my readers, Peeps and Company is offering 15% off if you spend more than $35 by using the code HEYMOMMY. Valid until 3/31/2013.