I looked down at my light colored yoga pants. It was then that I realized I had what looked like a chocolate smudge on them and wondered for a moment when did I get chocolate on these.

At this point, I had a revelation. See about a half hour ago, my toddler had started to poop in her pull-up, when I grabbed her and threw her on the toilet.  She had just started going in the pull-up, but did end up finishing on the toilet.  However, when I took the pull-up off the little pieces of poop that she had started to do fell on the bathroom floor. Without even thinking, I immediately disposed of them. Then, I proceeded to clean the floor, too.

I must have knelt into it as I was cleaning up. So that was the stain on my yoga pants.  Got to love it! But I didn’t even realize right away that I did this.

Because I was too busy taking care of two small kids and feeding them lunch.  Talk about embarrassing!  Except who was I to be embarrassed in front of two small kids that could care less.  It was bad enough that that I had child’s poop on my clothes. But I probably wasn’t even wearing anything that would be considered by many good enough to care about getting dirty. 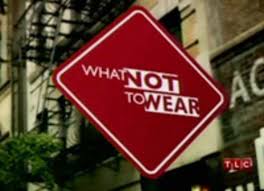 I Wonder If This Is Where I am Headed For…

Once upon a time ago in a far off place, I actually used to dress up and wear nice clothes.  I even owned designer clothes and shoes, too.  I worked in an office in my early twenties. It was here that I wore heels, and even clothing that was appealing for my petite frame.  This person would have never been caught dead in the clothes I was wearing today. She also most likely would have cringed at the thought of having poop stains on her pants.  Furthermore, she probably would have nominated me for TLC’s What Not To Wear!

Now fast forward to two plus years into having two kids under 3. See my wardrobe consists of comfortable clothes, including woman’s t-shirts/thermals, yoga pants, and sweatpants/sweatshirts. On rare occasions sometimes skinny jeans make an appearance. But more or less my yoga pants have become my uniform of sorts.  I also don’t remember the last time I wore a pair of heels. I mean why should I. See they hurt and I am on my feet all day. Wearing either Nike sneakers or Ugg boots is much more functional. In the summer or warmer weather, I add flip flops to the mix.

Why the change of heart about my clothes in this present day and age?

Because quite simply, I became a mother.  After my first child, I returned back to my teaching job. So, I still had to have some decorum and care as to my outfits that I wore daily. But then I got pregnant again.  I ended up losing my teaching job to economical issues and job excesses.  I had my second child, became a stay-at-home mom.

In the beginning I still cared slightly, but then I started to realize something.

What did I realize?

I had no one to impress other than babies. Plus where did I go all day?  See I have kids. Therefore, they could care less what I look like or smell like. As long as I cater to their every waking whim all is well in their little worlds.

Also, I go to places like Target, Stop and Shop, The Children’s Place or even The Dollar Tree.  In these places, who the hell is even looking at me.  I usually get stopped to be told just how cute my kids are. So, they sure aren’t looking at me!

One day, I was even stopped at Target to be told that my younger daughter was undressing herself. Maybe not the attention I was garnering, but still!  Yes, my younger girl likes to take her shoes, socks and hat off when she goes out.

But no one ever stops me to tell me that I look good or even to tell me I look like a holy mess!

So what is the big deal?

However, I can picture the conversation in my head with my younger self. See it isn’t pretty.

Let alone if my younger self ever met me now. Because not only wouldn’t she friend me, she be embarrassed to even know me.  Don’t get me wrong, I do dress up on occasion.

Like for the once a month date night or for a family party.

But I guess I am wondering is it so wrong to go out in yoga pants or even pajama pants on a daily basis?

Sorry sue me they are just comfortable.

But seriously hit me up in the comments to let me know that am not the only one who would probably be considered a fashion disaster now in my mommy uniform!