Never thought I would say this when I was first pregnant a few years ago, but I was that kind of mother today that just wanted to shut my kids up and tune them out.  We were driving home from picking up Emma from pre-school and Lily was screaming and crying in the backseat of the car for juice.  I didn’t bring a cup with me with something to drink for her and she decided in that moment to scream and whine the whole car ride home like she was being murdered.  Emma was whining a bit, too, but thankfully she knows for the most part when to quit while she is ahead.

But for Lily, I know this is probably a mommy fail.  But to be honest, since she has been potty training, I try not to give her anything in the car, because I don’t want to have to make unnecessary stops if I don’t have to.  I think other moms can attest the potty trip in public restrooms is not a fun trip even on a good day. 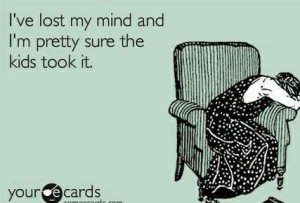 Back to Lily and that fateful car ride, where first I tried reasoning with her by saying, “We will be home from school soon.”  When that didn’t work, I then threatened her by saying,”Gingerbread was reporting back to Santa and no presents for Christmas.”  And of course, that had no effect and she still was screaming and crying in the car (that damn Elf really doesn’t seem to be helping this momma out!).  So what is a mom to do?  I put the radio on and gradually kept increasing the volume until I drowned out the little beast in the backseat.

First, I was listening to Bruno Mars new song, not going to lie so very catchy (yes, I am 35 going on 15 sometimes with my music preferences).  Then, came the new Matchbox 20 song.  And after that, was a holiday classic favorite, with “Its the Most Wonderful Time of The Year,” by Andy Williams, which was truly ironic considering the fact that it was anything, but the most wonderful time for anyone sitting in the car with Lily screaming.  But here I was singing at the top of my lungs, wishing that quiet time would befall my car from the backseat when all was said and done.

Unfortunately, that only happened once I pulled into my driveway and we made it into the house for the aforementioned cup of juice, which seems to have the same calming effect on Lily as too much as Valium would have on a nervous housewife in the 1950’s.  Once again Andy Williams springs to mind, with this same housewife calm from her valium listening to his music.  The irony truly is uncanny.  Sorry, but just couldn’t resist.