All over my social media feeds this past weekend, it was literally no surprise to see so many dishing and sharing that they were binge watching the new rebooted Fuller House, which is the updated version to the 1990s TGIF cult classic that is now available on Netflix.

Yes, I have Netflix and not going to lie was indeed curious about Fuller House, when I had heard all about the resurgence of this once beloved, yet kitschy show. 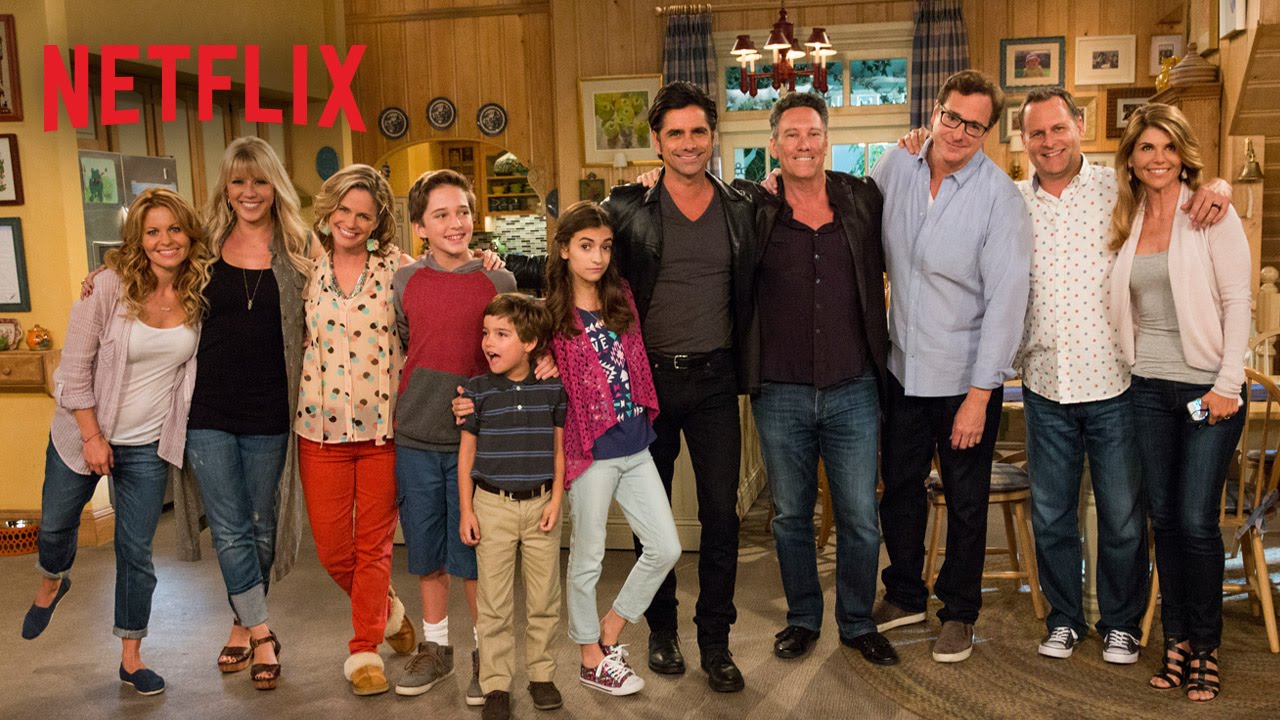 I streamed the debut episode early Friday morning before my girls woke up in bed on my laptop with my headset on as I couldn’t resist it on the premiere viewing day as a once long time fan of the original, Full House.  But before it was ending, my younger daughter climbed in bed with me and asked to watch along.

And watch she did.  She begged me to keep watching as she was quite taken with it, but the school day was ahead of her.  So, I promised that we would watch together later that day after school and dance.

See I was a few years older than her and her sister, when the original premiered and yes I totally admit that I watched all eight seasons.

Back then, I never would have imagined myself watching the latest recreation with my girls.

To say, it surprised me now is the understatement of my life.

But still nevertheless, it did indeed surprise me.  Yet, some surprises, such as this one, are at the very least good surprises if nothing else.

So, we happily viewed the first eight episodes this weekend together snuggled up in bed together in the evenings.

Still to come for us are episodes 9 -13, but I am pretty sure we will greedily finish the season in no time at all, because otherwise, “How Rude” would that be to start something we didn’t finish.

And yet “Have Mercy” as more surprises were to come for me in the form of three simple lessons that this revamped cheesy, but totally fun series has had in store for us so far.

1. Family is King with Hugs Galore –

The Tanners from Full House were always the family notorious for hugging it out and making family affection look cool.

So, no real surprise here that in this newer series hugging and being a close family unit is front and center throughout.  I mean, “Cut It Out” as even Kimmy Gibbler finally gets a hug from the big man himself, Danny Tanner in the very first episode.  Proving hugs are still the in thing.

I, myself, have always been a big believer in hugging and letting my family know that they mean the world to me in this fashion.  So, it is truly wonderful to see that even in this day and age that Fuller House is still keeping this affectionate embrace alive for the newer generation’s viewing.

In the original Full House, family in the form of Uncle Jesse came to the rescue and help out single parent, Danny raise his three young girls.  But also, Joey (Danny’s childhood best friend) moved into the home to give further aid, too.

In the latest installment, Kimmy Gibbler, DJ Tanner’s best friend from childhood, as well as DJ’s younger sister both move in to provide support and also help raise her three young boys.

So, family and friends help when need be in both shows, because it truly does take a village raise a child.

In real life, I have never tried to be the hero and am thankful for all the help and support, I have received from family and friends with my girls.  See my own girls have witnessed this in our home with both family and friends pitching in to help, too.

So, could not love it more thatFull House and Fuller House displays this in such a positive light.

I lost count how many times growing up watching TGIF’s Full House, I got a good and much needed laugh from the show’s antics.

But now, since watching Fuller House with my own girls, I have also witnessed my own girls laughing right along multiple times with me during each of the episodes we viewed so far.

So nice get some downtime as a family to not only spend quality time together, but also just simply get to laugh in the process.

By the way most of the jokes and comedy are still at its best in Fuller House, when the characters are not taking themselves too seriously and just being themselves. Which I couldn’t love more as a mom viewing with her kids, because I have tried to stress to my girls that life might have its ups and downs, but always just be yourself no matter what.

And now, “You Got It Dude” with these three sure fire lessons, I have gained so far from binge watching Netflix’s Fuller House with my young girls.  And the best news, as I published this, Netflix announced that they renewed Fuller House for its second season for more family fun viewing to come still.

Have you seen NetFlix’s Fuller House yet?

Tell me your thoughts below now…

This post was also written for the One Word Blog Linkup that is hosted by Lisa of The Golden Spoons and yours truly, too.

The words for this week are: Eventually or Normal or Surprise; Please feel free to linkup and join us this week.