“Only girls? No boys?” I can honestly say this is just one of many things that someone should never say to a mom.

But waiting at the airport to board a plane to go to Disney World for our recent vacation, I was asked this by a complete stranger. Why? Simply because she noticed I was the mom to two girls.

I honestly was taken aback. Plus, I was caught off guard by this person’s sheer and blatant rudeness.

But still, this comment most definitely irked me and got under my skin.

Think about it. Why would anyone think asking a mom a question like this would be considered OK?

However, I calmly answered her while looking her directly in the eyes, “Yes two girls, no boys and wouldn’t have it any other way.”

Then, I did my best turn my attention away from her for the rest of our delayed wait at the airport.

Still weeks after, I can’t help but think about this one simple comment. See it wasn’t the first time I was asked an intrusive question by a complete stranger. See I have heard many things that others should never say to a mom over the years. 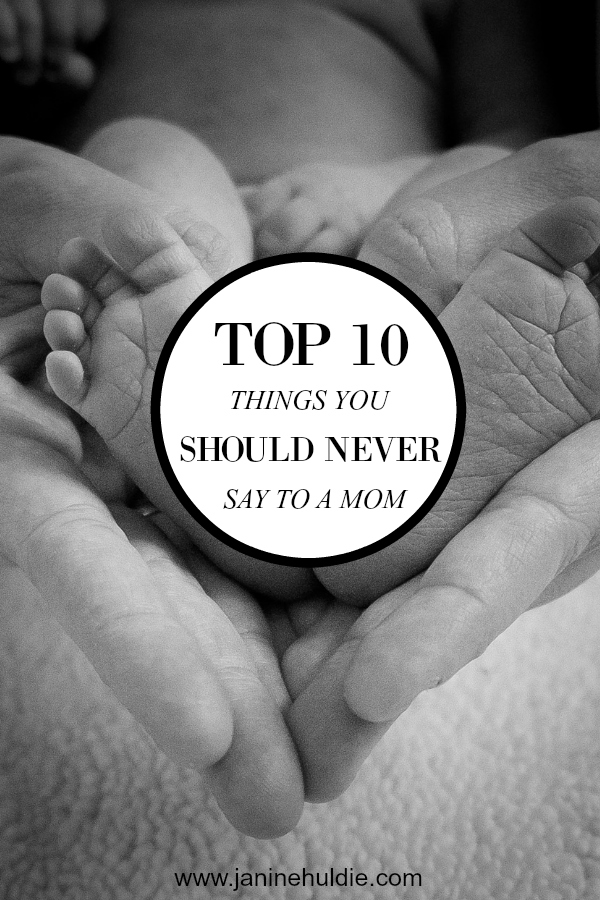 Because of this, I decided to compile a list of things one should never say to a mom.

The Top 10 Things You Should Never Say to A Mom

1. How far along are you? Pregnant or not!

Let me just say it that it is never OK to ask this question. Because whether the woman is pregnant or not, it truly isn’t anyone’s business at all.  I mean I have been pregnant twice, but not anymore, so clearly if asked this question now might just have had a large lunch, be bloated or be that time of the month.  Enough said and move on!

So, if a trained doctor told me I was having a boy or a girl, there is no need to argue with what he/she has been trained to do.  I literally lost count how many times during both my pregnancies that people tried to argue that I wasn’t having a girl but a boy just by the way I was carrying after I was told and shown that they were clearly girls. Seven and five years later, I can attest that both were girls and my doctor was indeed correct.

3. What a cute boy (when it is clearly dressed in pink, bows or dresses, too).

True story, I was in TGIFridays for a meal out after having my first, who just happened to be a baby girl.  She was in a cute pink dress with a pink headband bow on her little head along with a pink frilly blanket covering her, when another patron that night put her head right into the infant car seat she was slumbering in to tell us, “What an adorable little boy we had,” because my baby was bald.  Bald to this person clearly meant boy no matter what color I dressed my daughter in.

4. When are you having another one?

I probably didn’t hear this much after my first as I was pregnant in less than a year, but after my second, I lost count how many times strangers would ask me this question, which once again was not anything that they should or needed to concerns themselves with.  Plus, I am pretty sure having 2 babies under the age of 2 should have given me a pass on having more babies at least for a time.  Over 5 years since my youngest though, I still not having another and that is my final answer!

5. Is he/she sleeping through the night?

Got this one often enough, because yes my first looked just like her dad.  I took it in stride, but honestly just once I would have liked to answer, “Well thank god for science, because you know she has both my DNA and my husband’s, so she was bound to look like one of us!”

Again this is a given when you have kids, especially two babies under the age of 2 and if I looked anything less it would have shocked the crap out of me.  Just saying!

8. You are feeding your kid that?!

For any parent, who has a picky kid, you have my sympathies and clearly if you don’t then mind your damn business.  It is just a good day, when my picky eater actually eats a meal without complaints.  So, as long as she is eating something edible, I am over the moon happy!

If you have kids who are close in age than you probably have heard this one as often as I have.  By the way, just once I would like to answer, “Why yes they are” instead of “Well, they are 16 months apart and my older is small for her age, while my younger is just average”, because the latter is a mouthful and exhausting!

Again, some kids are small for their age and well some aren’t.  Genetics may come into play here or maybe not.  Still, just like no two snowflakes are alike neither are kids.  So, lay off the size comparisons.

What not to say to a mom #lists

Again these are 10 things one should never say to a mom. However, I have heard all of these and than some. Plus, let me say that they never get old.  Still I recommend that you never say to a mom any of the above.

What are some Never Say to A Mom things have you been asked?

Tell me in the comments…