No matter how forewarned you can be, nothing can quite prepare you.

As a writer for some time now, I knew the reality of going viral from all I had heard.

But what does going VIRAL mean?

Having an article go viral simply means, it is viewed by a very high number of people in just a short period of time.

See, as writers we are constantly in search of that great, white whale of an article that will get shared socially by thousands to be talked about by the masses very quickly.

And yet, I never really believed it could or would happen to me to be quite honest.

By the way, I was told that you can never quite predict, which article will be the one.

Even when you are writing it, there is no sign that this would be it.

And let me say that there is more truth behind that than you could ever imagine.

Also, as much as you hear about being on the receiving end of nasty comments from internet trolls when it does happen, as is with being in labor and subsequently giving birth, the same can be said about when you actually visually see your words twisted, chewed up and spit out by the masses, you never can imagine what it feels like.

Still, it did finally happen to me and I went viral with nasty internet troll comments coming in like wildfire on The Huffington Post, as I am a blogger with backstage access to write for them.

It was my 4th article to be published on The Huffington Post for their parents blog, which was published late on a Wednesday afternoon.

Wednesday night and into early Thursday morning, there was a small amount of interaction, but mostly by other writers.

Mid morning on Thursday, I had my younger daughter’s kindergarten orientation.

Before I shut down my MacBook, I noticed I had one comment that was definitely a bit snarky from a name I never saw before.

I turned my phone on silent and was off the grind for a little less than two hours all said and told.

But when I returned and checked in on my article, all hell had broken loose.

I had almost 400 Facebook likes and about 50 vile comments, each worse than the last.

I stared at my computer screen in disbelieve and my insides began to twist.

See up to this point, I have been very lucky as a writer garnering tons of comments on my own blog, but for the most part even if they were not in agreement with me, were always respectful and politely written to state why.

Not so with the comments, I had received and the ones to follow for hours and days later, too.

By that night, my article had been shared over 1.3K times.

Almost 175 comments filled with pure ugliness and hate, most not having truly even read my whole article, but skimming and scanning to finding their own meaning behind any small morsel they could.  I truly tried to stop reading, but of course would glance back once in awhile making sure I didn’t miss anyone who might have been a legitimate reader and commenter, until one commenter actually said that both my husband and I were terrible parents obsessed with our body image, especially the mother (me).

That sealed it for me and I literally felt the tears burning inside my head.

It nearly broke me, but I am NOT a quitter and never will be.

Still, I don’t feel that I owe an explanation to those who didn’t even really bother to read what I had poured my heart out to.

Yet, there was some lessons to be learned for me through this experience. 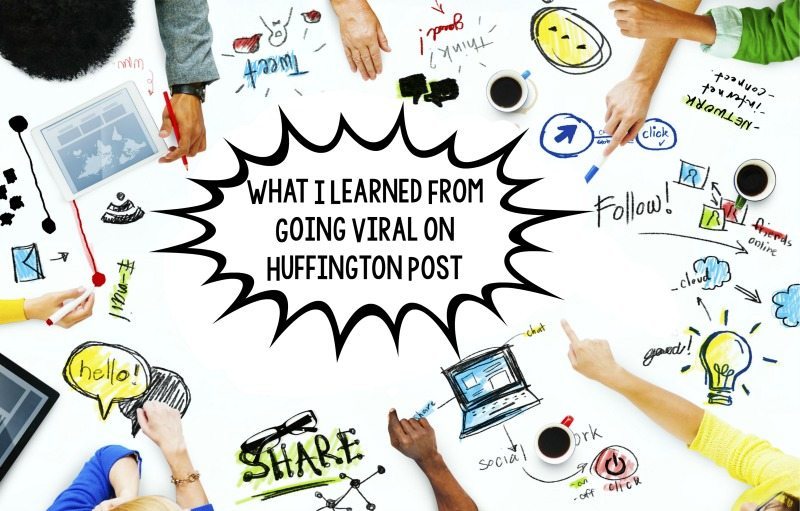 For one thing, if you are a parent then you know that not every moment of the day can be scripted like a 1950’s episode of Leave It To Beaver.

Parenting is messy, as is raising kids.  Kids say and do things in this day and age that isn’t always polite of G-rated.

Parents sometimes make mistakes even in the best of intentions.

An innocent conversation, where parents and their kids are joking back and forth with one another can possibly end up not as rosy or upbeat.

Some lessons learned from having my writing go viral…

Doesn’t mean that there isn’t infinite amount of love still felt among the family unit even after the dust settles.

Families love, argue, take the good with the bad and still are always there no matter what day in and out.

And at the end of that long day in particular, where my words were most definitely misconstrued and overanalyzed by the masses, still my own family was by side.

For my husband, took one look at the article and comments to utter, “You nailed it honey and couldn’t be more proud of you, but stop reading those damn comments, because these crazy people don’t know you or me and couldn’t ever know fathom the depth of love we feel for each other or our kids.”

As for my girls, they still curled up to me as they do every night, while we read bed time stories together and relaxed into my waiting arms after a long, crazy day whispering that they loved me and just wanted only me.

So, when all is said and done, I went viral over an article that I bared my soul about my own perceived body image insecurities after a mere joke made by my husband to his beloved oldest daughter.

We aren’t monsters and are just simply parents, who love our kids with all our hearts.

We are no worse for the wear from the original event that caused me to delve deeper, nor are we from the hateful comments.

Yet, now I am more than prepared for the future times that I may receive more unpleasant comments for I am a writer through and through who will not have her voice silenced.

So, thank you to The Huffington Post internet trolls, who made my skin that much thicker and I say bring it on next time!