“I can’t wait until Spring comes!” I must have said this one line about a thousand times now. And to be quite honest I hate the winter and the cold weather. A few years back, while were engaged Kevin and I toyed with the notion of moving to Arizona. I have heard hot it is there, but I seriously am the happiest when it is 100 and hot as hell. I would take that weather over freezing cold, snow or ice any day of the week.

Make no mistake though I grew up in New York and I love this state. I seriously would miss it if we ever left, but the cold, long winters are what I dread each year. And a few years back, we had Hurricane Sandy hit right at the end of October, when the weather just starts to change. We, of course, were the lucky ones being without electricity/power for only two days, but I have to be honest and tell you now I was left a bit traumatized from this freak storm.

As soon as the weathermen now start speaking of bad weather, particularly heavy winds, I get a knot in my stomach the size of the state of Texas. No joke, I literally get nauseous. I lived through that storm and watched the lights go in and out all days until we lost it all completely and then sat in the dark listening to wind like that I had never experienced in 35 years on this earth.

This truly brought no meaning to the things that go bump in the night. I am a mother and a wife, but was reduced to a scared child during this storm. I found myself that night being more petrified then I had been in years and nothing anyone could say or do was changing that for me. I remember laying in my bed at 12:30 at night praying to god that I would wake in the morning and we will all be here and safe.

Thankfully, I did and we were all OK. But then came those two very long days of waiting and yes I know it could have been longer, but I do not mesh well with cold temperatures nor the lose of the internet or my trusty iPhone. So, trying to stay warm for those two days without any connection to the outside world was definitely a challenge to me.  For those few mind numbing chilly heat-less days, I also lived in layers and couldn’t feel my toes when I had to change in the morning on the bare wood floor in our bedroom.

Miserable pretty much summed it for me, but still I will quite crying over something that could have been so much worse for us. Yet, I think I was definitely scarred from that experience and hearing about the snow storm that is on its way for us this weekend, my first thought was, “Dear God, please I know I hate snow, but if it needs to snow that us not lose power!!”

The Calm Before the Storm, While I Sit in My Home Worrying About Winter Storm Nemo

Yes, even years later, I still think about the power going out again too often and our weather over the last few months with heavy winds at least once every few weeks hasn’t helped me.

I am Spring dreaming right now, while it is freezing with snow falling. I also am just plain fantasizing of warmer weather. I mean if it has to be windy and we lose power again, can’t it at least be when we won’t freeze? I would much rather find ways to cool off than warm up if we do lose power.

So when Spring does come and arrive here in New York, I think and hope I will be able to breath a bit easier at least until next winter!!

This blog post was originally written from one of the February prompts from Bloggy Moms back in February 2013, while I sat in my house on Friday afternoon as the storm was indeed approaching, but am honored to share it here today with Tamara Like Camera readers while she is indeed escaping the cold, winter New England weather for sunny, warmer Florida, specifically Disney weather now.

By the way, that storm that I was indeed writing about left us with over a foot of snow, but thankfully we never lost power from it. More thankful I could not have been and my kids, of course,were more than ecstatic at that amount of snow (to be young again!). Once some of the cleaning up had been dealt with they got bundled up to go play in the snow. I will leave you with some photos from the winter wonderland event, showing how much fun my kids had after that snowy storm. Enjoy and again Spring truly can’t come quick enough for me now even two winters later!! 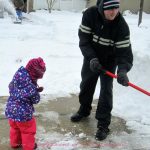 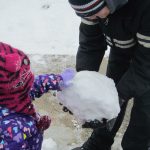 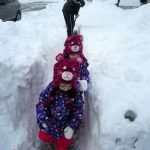 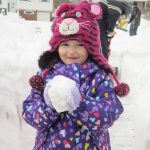 Emma so proud of handiwork on this snow ball!!

Lily is so excited!! 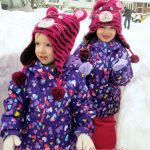 Sisters playing in the snow!!