When will I learn?  Seriously, after all the mishaps that have occurred when I have taken my kids out to dinner, what the hell was I thinking last night by taking them out to dinner with us?  If you don’t believe me about my kids being beasts when we do take them to dinner with us, read this.

Earlier in the week, I saw a commercial for Applebee’s new dinner creations (yes I know still not a fine dining experience, but just looked tasty to me) and got a bit nostalgic for the many times we used to go out to dinner before we actually had kids.  Pre-kids, we used to go out every Friday night to either Chili’s, TGIF’s, Applebee’s or Olive Garden.  Like I said, I know real classy, (not!) but still they were affordable and a treat after a long week of working and cooking, too.

I even recalled the time we went to Applebee’s days before Christmas and it had snowed earlier in the day.  Sounds stupid and sappy, but I couldn’t help but get a bit of a warm feeling thinking about it.

Anyway, Kevin took off from work on Friday and we had the kids pictures taken earlier in the day at Target for the holidays.  Then, he came home to finish painting while the girls napped and I wrote my heart away.  But then it was closing in on dinner time and the girls were requesting Friendly’s or Burger King.

I truly should have stuck with Burger King and called it a day, but my memories were still lingering and suggested Applebee’s or Olive Garden.  Kevin even joked that I wanted to go to Applebee’s, because Aiden from Sex in the City does the voiceovers!!  But in the end, he caved and had me call ahead to see the actual wait.  It was only a 10 minute wait and if I put my name on the list and left now now, we could get seated pretty quickly.

So, I got the girls ready and then we headed for Applebee’s.  When we got there, I gave my name to the host, a young guy that kept giving me the evil eye.  Not sure what his problem was, but yes I had two small children with me that would probably give the restaurant a run for its money.  Seriously get over it was my thought and then I put an old Italian curse on him to be the father to five annoying and bratty kids in the future (Ok, I didn’t really do that, but I like to think I did!).  Seriously though, I hope and pray someday this guy has his own pain in the ass kids and someone treats him with less than kind ways when he tries to go out for a meal.

It only took about five minutes to get seated, because I was at least smart enough to indeed call ahead.  I am sure someone else who was sitting there still waiting was probably putting there own curse upon me, which is probably why the rest of dinner went so swimmingly!

We were escorted to our booth and immediately both my lovely little girls decided they wanted to sit next to Kevin, because apparently I am so not the fun parent!  So, I got to sit with the jackets and toys that they brought (Yes, Lambie from Doc McStuffins and Baby Belle from Beauty and the Beast needed to go out for a nice meal on the town).

Our waitress finally came over to take our order and she too was just about as nice as our host was and barely even acknowledged the two children at the table.  I asked about their children’s portions and could have been asking about quantum physics for all she knew.  No joke, she was about as smart as a box of rocks and the personality of a wet mop, too.  In the end, I ordered one plate of chicken fingers and fries for the kids to share and we ordered drinks and an appetizer at that point, too.

The girls, of course, got their chocolate milks first.  Why must little kids immediately drink the whole cup in one gulp even before they even eat an ounce of food?  Seriously, they both annihilated those drinks faster than I could say done!  We ordered our main course as our appetizer arrived and just as I finished eating my first bite, the first request came from Lily, “Mommy I need to use the Elmo potty seat now?”  Of course, I mean it would stand to reason after she just ingested 8 oz.. of chocolate milk in under 30 seconds.  It goes from the lips into their bladders in record speed,I kid you not.  So of course, I forgot the damn insert in the car in the parking lot.  Kevin was sandwiched in by the two girls (great excuse), so off I went to the car to retrieve the seat.  I walk back into Applebee’s with looks like I had another head growing out of my neck carrying the princess bag with the potty insert in it. 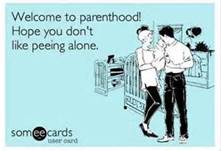 This About Sums Up My Life, Not Just My Evening…

I get back to our table, Kevin passes Lily across the booth to me and then of course Emma decides she needs to use the bathroom, too.  So, we look like a traveling circus heading to the ladies room and again the looks I get were priceless.  Finally get them in the restroom and take them in the handicapped bathroom, because at the very least it is large enough to accommodate two small children and an adult, too.

I set up the seat and put Lily on first.  She asks that I take all of her clothes off from the waist down (her new thing is to go to the bathroom this way, don’t know why, but Emma went thorough this phase too when she was first training so I go with it as much as I want to scream).  Seriously do you know how many times a day I now get to dress, undress and redress this kid?  Too many times to truly count.  She sits there though and after a minute tells me, “I don’t have to go.”  Ok, I am truly peeved that I am not enjoying my food, but in a bathroom with a child who never had to actually go in the first place.

But then I turn to see Emma doing the potty dance.  So, I take the potty seat off and proceed to try to help her go and she tells me, “No I am not using this toilet!”  All of a sudden, she is a connoisseur of toilets and this one isn’t good enough.  I try pleading with her, but she tells me it is too small (really meaning it is too big and she is scared).  So, I put the Elmo insert back on and now she is having a conniption that she doesn’t use it anymore, because she is a big girl.  Anyone who has ever tried to reason with a three year old will attest that this could leave you wishing you just banged your head against the wall to begin with, because this would do the trick a lot quicker!  Finally after all the pleading, I pull the Gingerbread (Elf) card out of the proverbial bag and tell her that he is going to go back to Santa, tell him she was bad at the restaurant tonight and not bring the Barbie Dollhouse she has been talking incessantly about day and night.  Her little eyes widened and used that toilet in about 30 seconds time.  And the Elf saved the day again!!

Finally, left the bathroom and walked back to the table with more lovely looks our way.  And found Kevin scoffing down his dinner while mine was sitting there going cold (which is about right).  He told me he figured that he should eat quickly, because once the girls came back to the table they would be climbing all over him.  By the way, the girls did manage to ingest a bit of their food too before this evening was over, but the chocolate milk was the way better hit and option for them!

My meal was nothing like the pictures on TV (got to love how they make everything look so mouth watering delicious when advertising it, but then when you actually order it in the restaurant it is pretty much crap on a plate.  So, I finished my cold crap on a plate, got the check, which was $50 with the tip (so not worth it).

And by the way, I didn’t tip as well as would have if our waitress actually gave a damn during our meal.  Seriously I am not a bad tipper and do have a heart as to what waitstaff go through, but between her personality as I previously mentioned, the lack of service (no napkins or plates for the kids to eat a shared meal), and just her overall rudeness, I felt obliged to teach this young girl a life lesson which was when waiting tables and dealing with the public at least put a smile and fake it if you have to.

What lesson did I learn after all of this?  The next time I want to reminisce about the good old days, leave the memories in the past where they belong!!

Now watch a funny video clip of what would be for dinner if kids created the menu: