Do I know how to party? Last day of the year or New Year’s Eve and one of the biggest party days of the year and what am I doing? I am doing coding on my blog for my new blog design. I have been working on this for two days now and my eyes are so worn out. I will tell you this, I had a migraine headache from a few days ago that never really left (just have some lovely leftover remnants). So probably not the best thing I can do for my poor hurting eyes, but nevertheless this is what I have been doing consciously to them, because I quite frankly I am a bit obsessed!

I should have been writing during my kids nap, but here I was trying to figure out the minute details that I did indeed have to leave undone late the night before (I needed a few hours of sleep). I think and hope I am pretty much done for now. If any tweaking needs to be done, hopefully it is on a much smaller scale for the time being. I will say I feel like I have learned a ton from working on the Blogger Design Course that I took and from trying to upload my design on my own blog. 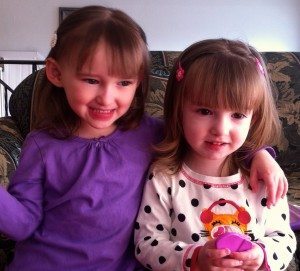 Happy New Year’s from My Two Angels (Aka the Beastly Ladies!!)

Now, my kids are indeed awake and Lily is even sharing the chair I am sitting typing. The chair is crowded to say the least and just thankful that Emma doesn’t want to squeeze on the chair with us, too! Even though it is New Year’s Eve, it truly doesn’t feel like it.

Traveling back in time, I can recall so many other New Year’s Eves and all the different ways I did indeed celebrate over the years.  First and foremost, I remember being a kid and going to my great-grandfather’s house to celebrate. There was always a ton of food and awesome company with my parents, brother, grandparents, aunts, uncles, and cousins.

Ironically though, one of the worst New Year’s Eves ever was the one where my orthodontist thought he would put a metal bar across the top of my mouth to widen my upper jaw and needed to do this by turning it ever so slightly each day with a matching metal key. We went as usual to my great-grandfather’s house, but instead of the usual fun I watched everyone eat all the wonderful treats while my mouth was so damn sore and hurting something fierce. Can we say, so not a happy night??

Then, as a teenager, I can recall going to my then friends’ houses and waiting for the ball to drop there. We again had a ridiculous amount of good food and thought at the time pretty good people to spend the night with.  At this age, I was pretty much on top of the world or so I thought!

In my twenties, I can remember going out to local bars with my then friends, having a few drinks, a bit of bar food to go along and dance until the wee hours of the morning. Even, when I first met Kevin, we went out for our first New Year’s Eve. His brother used to have parties at the house he shared with friends before he too got married. Again, great food and good friends to share the night with.

Then, we got married in 2006 and we spent our first few New Year’s Eves with Kevin siblings playing board games and sharing a bottle of champagne to celebrate. New Year’s Eve 2007, I spent it nursing food poisoning from The Melting Pot (we had dinner there two nights before and we actually had to cook said dinner in a fondue pot–memo to all never try to cook meat without a timer in a fondue pot) and will never quite look at that place the same!  this was probably the second worst New Year’s Eve at this point in my life.

In 2008, I was newly pregnant, was so nauseous and totally not feeling well, but this time because of a lovely thing call pregnancy hormones. So, we stayed home, played more board games and I watched Kevin eat, while I could feel the acid growing as the night went on.  It was for a worthy cause though, because I was helping to create Emma during this time.

New Year’s Eve 2009, Emma was five months old coming out of her colicky phase and had double ear infections. I remember Kevin and I kissing each other around 9:30 at night, saying Happy New Year and going to sleep while we could, because we didn’t know how long before Emma would indeed wake up. She did wake, but it was 1:30 am and 2010 had been for less than two hours. New Year’s Eve 2010 and 2011, saw more of the same with us staying home, but we did both barely make midnight.

Now for New Year’s Eve 2012, I was hopeful that we will both make it to midnight. Kevin worked and I did my blog redesign for most of the day as I already stated.  And as I mentioned in my 2012 recap post, we made a date to watch Ted on DVD that was a small part of Kevin’s Christmas present to me.

Guess what?  We never did watch Ted, because I was honestly too tired to stay up into the wee hours of the night (my kids, mainly Emma, decided they didn’t want to go to sleep before 11 pm).  So by the time we could have watched it, we both knew I couldn’t make it through the whole movie without falling asleep.  In the end, we settled on watching Wedding Band episodes on DVR that we still needed to catch up on.  It was just the two of us and we even missed the ball dropping by a few minutes (we forget to turn the DVR off to see it actually drop), because seriously when you have small kids what else can you do.

My girls, by the way, had no clue that the day was any different from yesterday (yet Emma didn’t want to sleep). They are still coming off the Christmas high from all the toys they received and have been playing or creating a disaster zone everywhere I turn. Toys are in places I never could have imagined. We donated boxes of toys and feel like we never actually did now.

This Is Why I Never Do Make Resolutions!!!

But I am made myself one promise that I did keep by not cleaning up toys for the so-called holiday, because that is pretty lame and pathetic (like falling asleep by 1 am isn’t). So the mess will be there tomorrow and probably the day after, too. Oh well, I will get to it, but I will not make a resolution to do this, because that is a sure way to never accomplish it.

Through it all, I have never been one to make resolutions, because to be honest I never do follow through. I just do what needs to be done when it needs to be. That is just the way I am and would like to keep it that way. Why fix something if it isn’t broke?? Also, we were informed from Emma, who told Uncle Michael when asked for a high five in her words, “That we don’t do that on holidays!” So it would appear that everyone has their way of celebrating and coping, too!!  But seriously, hope everyone had a nice night and Happy New Year to all!!